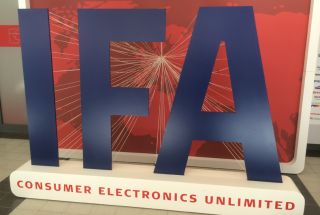 2:10pm Philips to serve up 4K TV content from a little black box

11.10am 4K and curved OLED sets among Haier's new range of TVs

11:30am Philips unveils its latest soundbars...

11.10am Philips overhauls its headphones line-up

11am All change for Philips' audio range

11am JBL unveils Cinema Base soundbase and SB350 soundbar

5pm Technics is back! The brand returns with high-end hi-fi range

1.10pm Dolby Atmos coming to Onkyo AV receivers on September 29th, along with Spotify Connect and news of a new TV sound system

We'll be reporting live from all the big press conferences from the likes of Samsung, Sony and Philips, and getting a first look at all the new TVs, soundbars, smartphones and more. We're expecting plenty of new products - take a look below to see the news we already know and what else we expect to see from IFA 2014...

IFA in Berlin has become the key tech show in Europe for big tech brands and specialist AV companies alike to showcase new products and technologies, and IFA 2014, which gets under way this week, promises to be no different.

The official IFA 2014 dates are September 5th to the 10th but we'll be on the ground from Wednesday 3rd in time for the first press events. Unsurprisingly, there's already plenty of news leaking out, with LG, Samsung, Sennheiser, Yamaha and more, already releasing IFA news.

Boo-Keun Yoon, President and CEO of Samsung Electronics, will deliver the opening IFA 2014 keynote, while Arcelik, a Turkish manufacturer, Intel and Nest Labs will all be giving keynotes. For a full list of IFA 2014 exhibitors, and for plenty more information, head over to the IFA website.

It looks like this year's headline-grabbing TVs will be curved or even bendable. We saw the first such televisions at CES at the start of the year, and Samsung recently put its bendable TV on sale in Korea (cheap, it ain't). Sony followed suit with its first curved range, the Bravia S90 Series announced earlier today, so we fully expect to hear more about TVs with a curve out in Berlin.

If high-res audio was the biggest AV story at IFA 2013, could Dolby Atmos make a similar noise this year? We've seen new AV receivers from Denon, Onkyo, Pioneer and Yamaha already - could Sony take its first step in to the Atmos arena? We should also get a first look (and listen) at the first-generation Atmos speakers on the market, so look out for our first impressions.

Wireless audio goes from strength to strength, so we're certain we'll see a wealth of wireless products at IFA 2014, from headphones to speakers, with plenty of them no doubt featuring aptX Bluetooth, too. Will NFC feature more heavily ahead of the launch of the iPhone 6, which is rumoured to feature NFC? It's something else to look out for, alongside wearable products, such as smartwatches, plus unifying smart home tech to will help all these products talk to each other in new ways and more intelligently.

Whatever the key IFA 2014 trends, you can be sure there will be a wealth of new accessories and headphones, with the likes of Harman-Kardon, JBL, Philips, Sennheiser and SoundMagic all likely to be launching new products in and around IFA.

Big brands have the biggest floorspace at these shows, so LG will again be one of the manufacturers making the most noise. Last year the company launched the world's first 77in curved 4K Ultra HD OLED TV alongside the 55in Gallery OLED that was designed for your living-room wall.

We expect more curves in the company's TV line-up to appear, while we may also get a first look at the 105in curved LG 5K TV, which is available to pre-order in Korea if you've got money to burn. We find it hard to believe there will be much more in the way of "5K" kit on display, however (Samsung excepted).

It also looks like we will see new smartphone from LG at IFA, with the G3 Prime heavily-rumoured to be announced and the G3 Stylus now confirmed for an IFA launch, meaning two new variations on the flagship LG G3 phone.

As a brand responsible for turning out pretty much every type of AV product on the market, we wouldn't be surprised to see plenty more by way of new products from LG. With multiroom audio a big buzz category, could LG follow the likes of Bluesound and great rival Samsung and join the wireless audio multiroom club?

Panasonic has been a little off the pace in the world of TVs since the demise of the company's famous plasma TVs - and we weren't overly enamoured with the brand new AX802 Series - but we should get our first look at the company's new flagship TV at IFA 2014, the AX902, which was teased earlier in the year.

It's not beyond the realms of possibility to expect to see some completely new screens, too. Curved sets? Sounds like a long shot for Panasonic.

The company is still very much involved when it comes to the wider home cinema market, so safer bets would be on new speaker systems, soundbars, Blu-ray players and other AV essentials.

Philips normally saves plenty of new products for IFA, with IFA 2013 the scene for the launch of the company's first 4K TVs, alongside Fidelio headphones, speakers and plenty more besides. We expect to be similarly well-endowed with new Philips products this year.

The Philips Fidelio X1 headphones and Fidelio E2 speakers went down a storm with us here at What Hi-Fi? so new products in a similar vein would be welcome.

We should get a good look at the new Philips Android TVs, too, while the flagship 9800 Series Ambilight TV (above) will also be on display.

Always a big presence at IFA - as it is at any consumer electronics show - Samsung has already announced its Unpacked 2014 Episode 2 event. Due to take place on September 3rd at 2pm BST, the event is expected to be the showcase for the Galaxy Note 4 tablet and Gear Solo smart watch. Also tipped to be revealed is the Samsung Galaxy Alpha smartphone, supposedly an upgraded version of the flagship Galaxy S5.

Samsung has also confirmed new apps and games for its Smart TV offering. Skype, Need for Speed Most Wanted and Real Football 2014 are some of the the new apps set to be added.

The company has also revealed Amazon's 4K streaming service will come to Samsung TVs in October, as the Korean giant aims to position itself as the go to TV brand for Ultra HD content.

Last year Samsung showed-off "the world's largest" 4K TV, a 110in Ultra HD monster, so we wouldn't be surprised to see another flag-in-the-sand TV launch to help the Korean company grab some headlines. How about a curved or bendable screen? Or maybe just that 5K Samsung TV? We shall see.

Accessories a-go-go are almost guaranteed, with Samsung turning out wireless speakers, headphones and even multiroom systems at the drop of a hat. The Samsung M5 speaker (above), part of the company's multiroom range, will certainly be on show. We'll be on hand to mop up whatever we see that's new and interesting...

We fully expect Sony's first curved 4K TVs to be a big draw at the Berlin Messe exhibition hall - Sony has even tweeted as much. Sony is behind the curve (sorry) when it comes to curved screens but the S90 Series shows the Japanese giant must also see some future in convex displays.

Last year we saw a complete family of Sony high-resolution audio products, so we wouldn't be surprised to see some new additions to the family this time around. The NWZ-ZX1 Walkman was the company's first attempt at a portable high-res audio player, could we see the next in line?

A leaked invitation for Sony's press conference has been published by Xperia Blog (see above), which says the press conference will be Wednesday 3rd September and, if you want to second guess the relevance of the assorted images, suggests there could be new Sony smartphones, screens and cameras. This has since been all but confirmed by the Sony "#XperiaDetails" teaser video (above).

Elsewhere, we're yet to see any Sony Dolby Atmos AV receivers, could IFA be the place? We'd be a little surprised but you never know...

Yamaha is set to reveal no less than 15 new products in Berlin. Headphones, soundbars, stereo amplifiers and desktop speakers all feature, with the new AS-301, A-S501 and A-S701 integrated amplifiers – due to hit shelves in late autumn - arguably the most eye-catching new products.

Yamaha will also be launching the YAS-203 soundbar to replace the YAS-201 (£400). It sports a wireless sub, Bluetooth connectivity,app control and a new look design.

MORE: Yamaha to launch new amps and more at IFA

They may make the most noise but IFA isn't all about the big brands, far from it. With 116 brands listed under 'headphones' on the IFA website, including Audio-Technica, Beyerdynamic, Jabra, Klipsch and Sennheiser, we expect to see plenty of action there.

We already know about the new Sennheiser CX range, with four new pairs of budget in-ear headphones set to be officially showcased for the first time in Berlin, while Scottish brand RHA has also revealed its new T10i in-ears ahead of the show.

Similarly wireless speakers and systems will no doubt be to the fore, with the likes of Harman-Kardon, Pioneer and Pure likely to get involved in this category.

The biggest hi-fi brands tend to favour the Munich High End Show for key launches but there should be plenty of new home cinema kit for us to get our teeth in to from the specialists.

Epson and JVC are both exhibiting, so we'd confidently predict some new projectors may surface, while companies such as Loewe, Onkyo, Toshiba and Yamaha should ensure there's plenty more for home cinema enthusiasts to get excited about.

Elsewhere, Spotify is celebrating the first anniversary of Spotify Connect by revealing a host of new brand partnerships which, again, will be officially revealed at IFA.

Look out for live coverage from Wednesday next week, when we'll be on the ground in Berlin scouring the show for the best products to keep our news channel busy...