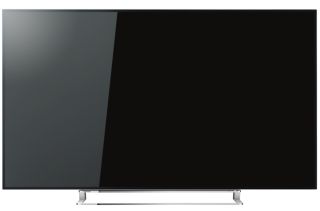 We're expecting to get more details from Toshiba in terms of the U Series' specification once we're on the ground in Berlin later today, but the company has released details of some of the key features of its next 4K Ultra HD LED TV range (pictured above) ahead of IFA.

Toshiba has ticked-off one of the most crucial features on a new 4K TV with the inclusion of the HEVC1 codec - necessary for streaming 4K content (or playback from USB sticks and SD cards) and a feature that was missing on this generation of Toshiba 4K TVs, such as the Toshiba 58L9363DB. This could mean that the Toshiba U Series comes with the Netflix 4K streaming app.

The screens still use the Toshiba CEVO Picture engine and sport (for the first time) the MediaGuide Replay - "Toshiba's personal catch-up TV service" - which promises enhanced remote control functionality using a tablet or smartphone. First seen on the Toshiba L74 Series, MediaGuide Replay recommends future programmes to record based on your viewing habits.

Toshiba has also revealed details of two new additions to its L24 range of full HD TVs in the form of a 40in and a 50in model. The 40L2436 and 50L2436 (above) feature two HDMI inputs, USB and PC inputs, a Freeview HD tuner, and Toshiba's AMR+ 200 motion processing. You can also unlock PVR functionality by adding a USB hard disk drive (sold separately).

See all the Toshiba news, reviews and products