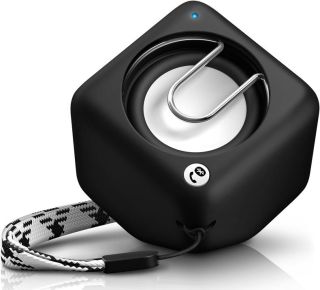 Philips (and by Philips we mean Woox Innovations. And by Woox Innovations, we mean Gibson Brands. That was the chain of command last time we checked) has used its centrepiece press conference at IFA 2014 here in Berlin to announce an absolute avalanche of new audio products.

The FL3X is a rubberised, pocket-sized speaker-on-a-string in a choice of four really rather sudden colours. It’s good for 12 hours of playback from its integrated lithium-polymer battery and has two watts of power feeding its 1.75in driver. Oh, and it expands telescopically for what Philips asserts is ‘better’ sound.

The PIX3L speaker (pictured at top) doesn’t change shape, but its flattened-cube shape (in a range of bright colours, of course) points the 1.75in driver upwards for better sound dispersal. Power is, again, a couple of watts and the PIX3L should last for 8 hours on a single charge of its built-in battery.

The FL3X is likely to sell for €39 and the PIX3L for €35 – if we’ve learned anything it’s that those numbers won’t get any smaller when they’re translated into sterling.

There’s plenty more Bluetooth action where that came from. The BT2110 is a Bluetooth Micro Music Tower, no less, a 2.1 integrated system with aptX, NFC pairing, FM tuner and 80 watts to power its pair of 2.5in drivers and 5in subwoofer. Philips expects it to cost €200.

Then there’s the ORT7500 (a rather soulless name for such a charmingly characterful product). Based on original Philips design from the 50s, the ORT7500 (€230) is a DAB+/FM radio with 30 presets, stereo sound and Bluetooth connectivity.

MORE: Read all our radio reviews and news

And we also saw the launch of a five-strong selection of stand-alone Bluetooth speakers. The range starts at just €50 with the BT2500 (small enough to fit in the palm of your hand) and moves up to the €80 NFC-equipped BT3500 (handbag-esque in both shape and size). €80 also buys the NFC-and-aptX charms of the BT5500 (which looks so much like a handbag it even has a handle), or if you can stretch to €100 the BT5580 is the same thing but with an integrated rechargeable battery. Top of the shop is the BT7500 (€150) which, claims Philips, is ideal for your main living space. We’ll be the judges of that.

‘Multipair’ is Philips’ attempt to put an end to the all-too familiar ‘pair-and-connect’ rigmarole we all have to endure if we want to listen to music stored on a different phone or tablet. The AEA2700 Multipair adapter allows you to pair and connect as many as three different Bluetooth devices simultaneously, and it can also turn any non-streaming system with a 3.5mm input into a Bluetooth receiver. Yours for €50.

Philips also fancies a bit of the burgeoning multiroom streaming action, which is where the SW700M and SW750M speakers come in. Both incorporate Spotify Connect, and both can be used singly, in pairs or in greater multiples.

The SW700M (€100) features a pair of 2.5in full-range drivers and a couple of bass reflex ports; the bigger SW750M (€150) packs a pair of 3in mid-bass drivers working in tandem with two tweeters. As well as the ubiquitous Spotify app, both speakers feature a proprietary app that allows the user to group multiple speakers into a single group.