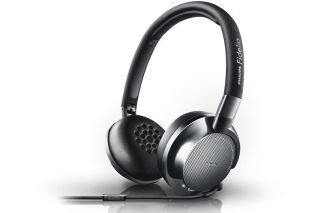 Lately, Philips has enjoyed an enviable run of success with its range of headphones, and IFA 2014 in Berlin sees the company update, upgrade and generally spruce up its well-regarded line-up.

The Fidelio NC1 (pictured above) is a noise-cancelling pair with the emphasis equally on performance and sophistication. The active noise-cancellation technology uses four microphones to detect and invert ambient noise, and a battery life of almost 30 hours means they’re good for the longest of long-haul flights.

Memory-foam ear-pads take care of comfort, a pair of 4cm drivers deal with the sound you DO want to hear, and a combination of leather, aluminium and rubber in the compact, folding construction means they should look the full €250’s-worth.

MORE: Read all our Philips reviews and news

Moving from the on-the-go NC1s, Philips is launching the kick-back-feet-up Fidelio X2s. These are a €300 pair of open-backed memory-foam/leather/ aluminium/neodymium hi-fi headphones, fitted with 50mm drivers and with a great deal of attention paid to finish and sound-quality. The original X1s were real favourites around here, so we’re keen to get our ears between the replacement X2s.

Another headphone that’s had ‘1’ added to its model number is the Fidelio M2BT Bluetooth pair. The M1BT took our ‘Best wireless headphones’ Award last year, and for 2014 they’ve had a design re-think and gained NFC pairing. €250 is the expected price.

Another model to be refreshed rather than reworked is the Fidelio M1, which with a great leap of imagination becomes the Fidelio M1mkII. Philips claims the new design delivers a wider soundstage thanks to its lighter voice-coil and retuned 4cm neodymium drivers. At €200 the price remains broadly the same.

Does the name Armin van Buuren mean anything to you? Yes? Well then you’re exactly the type of customer Philips is aiming at with its A1-PRO. For those who aren’t so certain, van Buuren has been a Big Cheese in DJ terms for getting on for two decades, and his requirement for powerful, accurate sound from a rugged pair of headphones has brought Philips to the point that it’s comfortable asking €100 for what is, essentially, a stripped-back version of the €300 A5-PRO model that’s been on sale since March this year.