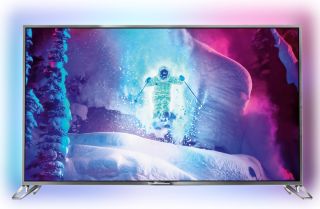 Philips has unveiled the new 65PUS9809 Ultra HD 4K TV as part of a new 9800 series. The new TV runs on Google's Smart TV platform, giving users access to the Google Play Store and with it, a whole range of apps and services.

Philips has once again used its Perfect Pixel Ultra HD picture processing engine in the '9809, which the Dutch brand claims delivers "razor sharp, detailed pictures with great depth and contrast." The Ultra Resolution upscaler meanwhile promises to make the most of non-UHD content on the 4K screen.

Ambilight technology is also part of the package, with Philips fitting lights to all four sides of the screen for a more immersive viewing experience.

A compact wireless subwoofer, which can be tucked out of sight, is also available to those who purchase the 9800 series. It promises to deliver "vibrant, natural and full sound" when coupled with the TV.

The Philips 65PUS9809 will be available during the third quarter of 2014. Pricing details have yet to be released.