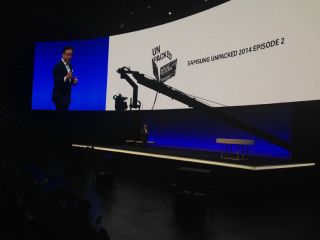 Despite being quite a distance from the exhibition space itself, the Samsung 'Unpacked 2014 Episode 2' event (as it's rather self-importantly called) is already shaping up to be one of the highlights of IFA 2014. As far as production values go, Samsung is a stranger to understatement - the company likes to start these things volcanically and then build to a climax.

Consequently we were first treated to some sub-Jean Michel Jarre noodling from 'Band of Wizdom' (sic) who utilised Soundcamp, Samsung's 'new real-time music solution' (as well as massed strings and horns) as a prelude to DJ Lee, President of Samsung's IT & Mobile Communications Division, taking to the stage. Of Soundcamp, or for that matter Band of Wizdom, no more was heard. Instead Mr Lee announced "our industry is about to jump". And then we were introduced to the new Galaxy Note 4.

Despite upping the pixel count dramatically from the outgoing Note 3’s Full HD resolution, Samsung says the Note 4 will go from flat to 50% charged in just 30 minutes. The front-facing camera is a 3.7 mega-pixel affair with 120-degree panning for those who want to include as many people as possible in their selfies.

The rear camera, meanwhile, is a whopping 16 mega-pixels, and is supposedly 60% brighter than the Note 3’s camera. It has 3 microphones, allowing directional recording.

And even beyond the numbers the info keeps on coming. The soft-texture design is retained from the Note 3, but the Note 4 is framed with metal and has even tougher, more durable 2.5D glass.

The screen itself is now Super AMOLED (far brighter than LCD, says Samsung). Multi-window functionality allows picture-in-picture and split-screen configurations to keep the multi-taskers happy. The S-pen is improved where speed of motion, rotation and angle of tilt is concerned to make the experience more, well, pen-like.

And just in case all this isn’t enough, there’s also a Limited Edition smartphone imminent: the Galaxy Note Edge. Uniquely, the Note Edge has a second, narrow screen rolled to one edge of its frame. It can store icons, display camera information like an old-school digital camera, or even be used as an entirely separate second screen (albeit a narrow one). It puts us in mind of the spine of a book (if that’s not too arcane a reference when we’re discussing bleeding-edge technology such as this).

It’s more than a little disappointing to report no mention of audio quality for either telephone, let alone any suggestion of high-res. But there’s little doubt the Note 4 will be a formidable proposition. We should be getting our hands on a review sample very soon.