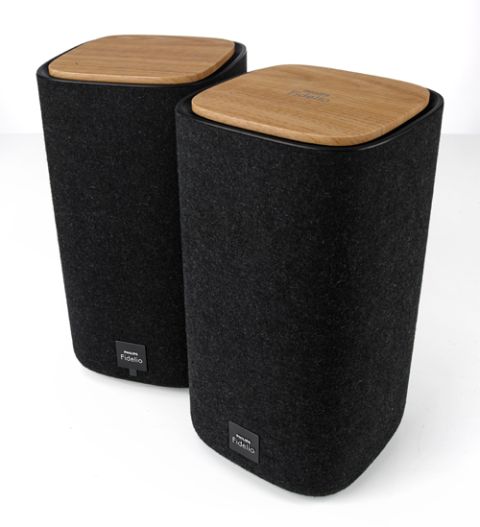 Musical and detailed, these versatile speakers have your entertainment needs covered

The Philips Fidelio range has made quite a splash.

We’ve showered their headphones and speakers with four and five stars, so it should come as little surprise that the E2s claim even more plaudits for their impressive haul.

You don’t have to look far to see why. In true Fidelio form, the E2s have quality in terms of style and performance, with an impressive feature list too.

For Bluetooth speakers, the usual mod cons are in place.

NFC (near-field communication) pairing means streaming aptX or AAC Bluetooth can be achieved by merely tapping a smartphone or compatible device onto the left speaker’s tag.

For standard pairing, press the Bluetooth button on the remote or unit and look out for ‘Philips BTS7000’ when scanning from your device.

The commonplace 3.5mm input lets you opt for a wired gig instead.

You can’t stream music over your home network though, which rules out AirPlay as well. But the E2s have another trick up their sleeve – and this is where Philips pursues an entirely new game plan.

With optical, coaxial and HDMI digital inputs at the back of the left (‘L’) speaker, they are also designed to boost sound from a TV, PC or games console – because, let’s be honest, it probably needs boosting.

Have we just stumbled upon its soundbar alter ego? The E2s certainly give soundbars a run for their money.

We ran a Blu-ray of Harry Potter and the Order of the Phoenix through the HDMI input (they decode Dolby Digital by the way) and details as subtle as the scratching of a quill on paper are easy to make out.

Chatter around the table is both enveloping and well imaged, and there is a decent amount of clout to Grawp the giant’s footsteps. The Weasley brothers’ fireworks whiz from one speaker to the other with sufficient snap, crackle and pop.

The coaxial and optical digital inputs brandish a similar quality, while the 3.5mm input loses a smidgen of clarity.

With the inputs at the back of the left speaker, the right (‘R’) houses the mains supply socket to power them. A 3m cable connecting it to its counterpart should be long enough for most living rooms and home cinema set-ups.

But for Bluetooth speakers these are chunky. Each speaker stands 30cm tall and 16cm wide and deep, so make sure there’s enough room either side of your TV or on your desktop to accommodate them.

There is no questioning these are elegant entries from Philips. The two cuboid pillars, curved at the edges and clothed from top to bottom, are a treat to look at. The wool-like cloth makes them almost huggable!

There’s no display of sorts – only a tiny light on the left speaker to indicate source selection – and the 2.5cm tweeter and 10cm driver are hidden by the material mesh too.

But it’s the polished wood ends they are capped with that give them a luxurious feel – and these aren’t just for show (well, one isn’t anyway).

The mechanics of the left speaker’s ‘rocker’ design means that pressing each side of the square panel controls power, volume and source input. It’s a clever function and makes a nice change from the monotonous poking of buttons.

But sleek as it is, you'll probably want to use the remote once you have sunk into your recliner chair. Powered by a CR2025 battery, it’s an oval-shaped slimline tool that sits nicely in hand.

A tidy button arrangement adds controls to change bass and treble, and select the surround sound mode. Switching it on forsakes vocal projection for a wider soundstage of background noise, though we preferred it off for the majority of testing.

‘AudioSync’ buttons let you tinker with time delay in increments too if the sound isn’t properly synched with your TV picture. This was never the case with our Panasonic telly: it was well integrated and voices were punctual.

Switching to a Bluetooth connection with a Nexus 7, we played The Knife’s Pass This On and there is a tidy portrayal of the ensemble of xylophone notes and warping electronic sounds.

Detail is there in spades – the soft brushing of cymbals are plain as day in Suede’s For The Strangers, despite the heavy riffs and Brett Anderson’s dominating vocals that could easily wash them out.

The E2s have a flair for imaging too. Pinpointing the six-strong jazz arrangement on a stage during Woody Allen & The Eddy Davis New Orleans Jazz Band’s Swing A Lullaby is no mean feat.

These speakers will make marathon music sessions fly by – and they have the big sound to go with it.

The sense of sound and space that makes them superb companions to your TV can be found whether amplifying Andrea Bocelli’s tenor voice to room-filling levels, or exhibiting theatrical drama to Barbara Streisand’s Don’t Rain On My Parade. The E2s love a song and dance.

The problem lies with the bass. It’s a bit overcooked, browbeating the midrange and treble. While this can balance a thin TV sound, music can suffer from its beefy, overbearing presence.

In contrast, the midrange feels distant, with a hollowness that the speakers can’t escape and precision wanes as a result.

A pinch more panache gives them the edge with recordings like The Jackson 5’s I Want You Back.

Still, the E2s are classy speakers and if you have room for them, their slick design makes them an attractive proposition for any set-up.

Performance is paramount and the E2s don’t disappoint with tuneful, detailed sound and easy-on-the-ear delivery. Give them a clearer, more balanced presentation with a better grip on lower frequencies and they would no doubt land a fifth star.

But if you’re after a one-set-up sound solution for your music and movies, the Philips Fidelio E2s promise hours of entertainment with both.