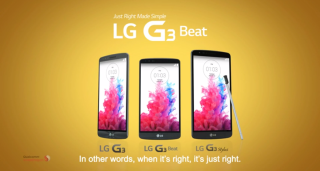 The first model is rumoured to be called the G3 Stylus. The Stylus is touted as being LG's answer to the Samsung Galaxy Note 4 - also expected to be unveiled at IFA 2014 - and, going by the teaser image, will be larger than the 5.5-inch LG G3 with a predicted screen size of 5.9 inches.

Any further specs are thin on the ground at the moment, however PhoneArena claims the Stylus will come with a 960 x 540 qHD display and running Android 4.4 KitKat. This would appear to be a step backwards in terms of display resolution, the flagship G3 comes sporting a 2560 x 1440 screen, so it's likely this will be a more affordable model.

The other smartphone likely to make an appearance in Berlin is the LG G3 Prime. LG recently launched the G3 Beat in South Korea, and the Prime is allegedly the international version. In essence, it's a much beefier and more powerful version of the current G3. It's rumoured to come with a 2.7GHz Qualcomm Snapdragon 805 processor and 3GB of RAM.

The G3 Prime should sport the same screen as the one found in the G3 - which is no bad thing - as well as the same front and rear cameras.

With just under a month to go until IFA 2014 in Berlin, we don't have long to wait to find out the full details.