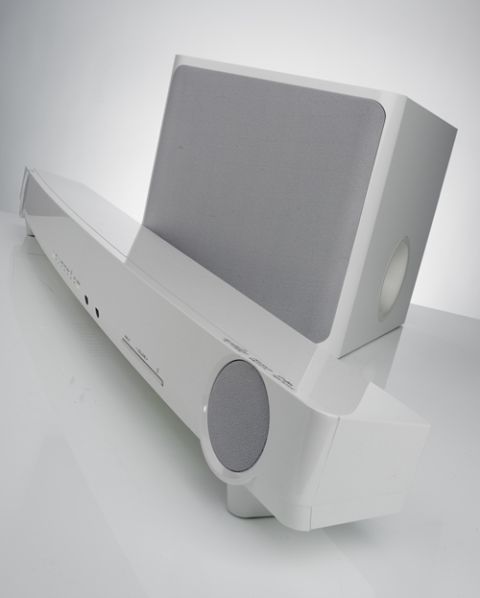 The Yamaha is worth auditioning, but struggles to muster the extra gear needed to be considered a class-leader

The Yamaha YAS-201 might be one of the company’s entry-level models, but it still manages to look attractive in its glossy white finish (black is also available).

It doesn’t feel like the most robust of units but Yamaha has delivered some of the best soundbars around in the past so we can turn a blind eye to this for now.

The unit measures just under 10cm tall and the bar is angled up slightly towards the listener. If you find it obstructs too much of your television, you can unscrew and remove the feet at either side.

Yamaha also makes provisions for wall-mounting: there’s a template included in the box, which shows the bar’s dimensions and where you’ll need to drill.

Inside the bar are two 5cm drivers, while the ported, wireless subwoofer uses a 16cm driver to serve up bass.

Yamaha’s marketing blurb claims its Air Surround Xtreme technology even has the ability to reproduce 7.1-channel surround sound. The YAS-201 does have Dolby Digital and DTS decoding built-in, so it’ll be interesting to see how true that is…

Yamaha has fitted this soundbar with twin optical inputs, and although HDMI sockets would be nice, at least this gives you the option to hook up a couple of sources. You can also invest in the YIT-W12 30-pin transmitter (£50) and stream music from a compatible iOS device to the soundbar.

On the front of the unit is a row of green status LED lights, which can also indicate the subwoofer level when it comes to adjustment. There’s text above them, but it’s miniscule and next to useless, especially if you’re sat a decent distance from your TV.

There’s also a small group of slim plastic buttons for volume, input selection and placing the unit in standby mode.

The supplied remote covers basic functions such as input selection and volume levels for the subwoofer and the system as a whole. Buttons are also provided for engaging Yamaha’s Clear Voice and Uni Volume settings.

Clear Voice is there to boost dialogue and speech – and it does exactly that (but it also unbalances the overall presentation and places everything bar voices on the backburner). Uni Volume ensures that as you change source or TV channel, you’re not caught out by any sudden jump in volume levels.

To save you from having to wield multiple remote controls, the Yamaha also features a learning function, which lets you control the it through your TV’s remote. Setup is as simple as pressing a couple of buttons on front of the soundbar and on your TV remote just so the system can learn the commands.

Unlike Yamaha’s more expensive soundbars such as the £800 Yamaha YSP-2200, the YAS-201 doesn’t use its multi-driver Digital Sound Projector technology to bounce effects off your walls to help create a surround effect.

Instead, hit the ‘surround’ button on the remote and the system engages Air Surround Extreme – more of a pseudo surround processing system, which just seems to recess some effects while promoting the spread of others in front of the listener.

Watch the opening credits from Sherlock Holmes and although there’s more of a sense of left and right across your listening position, there’s little if any ‘surround’ impact from the atmospheric opening credits.

So, we suggest listening to the system in Stereo mode. Detail levels are good for a system of this type, and dialogue sounds clear enough without enabling the ‘Clear Voice’ function through the remote. There’s a decent balance across the frequency range and there’s scale and dynamic reach to be had too.

We’d like a bit more openness, though, and more excitement when it comes to movie soundtracks. The subwoofer can also sound a little tubby and disjointed: play Massive Attack’s Angels and low frequencies sound less precise and not as punchy as they might.

The YAS-201 does the job, then, but doesn’t do it quite well enough to convince us it’s worthy of a full five-star rating.