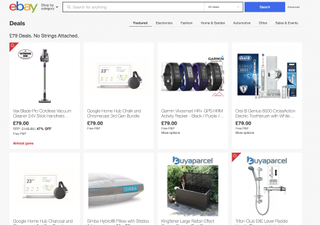 Amazon Prime Day is upon us. However, this year Amazon isn't having it all its own way. Alongside Walmart, another of Amazon's greatest retail rivals, eBay, recently announced that until 20th July it will be crashing the party by running its own 15 days of deals bargain bonanza.

In what can only be a dig at Amazon and its famed Prime Day, eBay promised to slash the price of two must-have items from the likes of Simba, Vax, Oral B, Google, Karcher and De’Longhi to to £79 every day – the cost of a year of Amazon Prime membership.

Currently, the tally of no-strings-attached £79 deals has hit 41, from heavy-hitters like Oral-B, Google and Kenwood, but we think it'll only keep growing.

eBay is also promising up to 70 per cent off electronics in the lengthy sale, with top brands such as LG, Samsung, Google and Currys likely to be involved.

The online auction site is quick to point out that nobody's asking you to be a paid-up member of its site to get in on the action, either. Unlike Amazon, which demands that customers sign up for Prime membership in order to access deals, with eBay there are no membership fees, leaving you footloose and fancy-free to shop up a storm.

Rob Hattrell, vice president of eBay UK, said, “eBay always puts its customers and sellers first. We don’t think we should be charging our customers a membership fee for them to enjoy great discounts and offers, and for the next 15 days we will be sharing our best ever discounts with them."

Speaking at the launch of the event, he added, “There will be deals on thousands of products across eBay that customers actually want, not just discounts on products no one ever buys or on end-of-life stock. This includes huge savings on smart speakers, big screen LED TVs, electric toothbrushes and garden gadgets. The deals will be updated every day, so customers should keep an eye out on site for all the amazing offers, and enjoy shopping.”

Well that's us told, then. Keep your mince pies on eBay for the foreseeable and, naturally, we'll be reporting on the best deals we see, too.