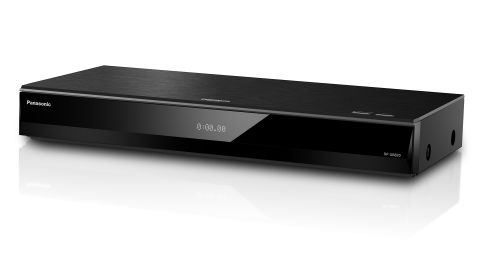 On paper, the Panasonic DP-UB820EB looks like quite the prospect. This 4K Blu-ray player borrows much of the picture processing technology that you find in the company's flagship 4K machine, the DP-UB9000, but costs less than half the price.

If the UB820 can produce a picture of a similar standard and nail the sound part of the equation, we could be looking at quite the home cinema bargain.

The Panasonic DP-UB820EB is a chunky rectangle of a deck. It’s a lot wider and taller than proper budget Blu-ray players and the beefier dimensions give it a more substantial look. The bevel cut finish around its edges looks attractive enough, as does the brushed effect on the top panel. But up close, the player looks and feels a little cheap and plasticky.

You get a matching chunky remote that fits nicely in the palm of your hand. It’s textbook Panasonic – the buttons are a good size and spread out instead of feeling cramped. It’s easy for your thumb to find its way around the wand, even if it doesn’t have a backlight.

The main unit is pretty minimalist in terms of design, with just two buttons on the top panel for power and opening/closing the drawer. The front panel drops down as the drawer extends out, revealing the player’s display (which is also visible with the panel up) and one of the DP-UB820’s two USB inputs. This particular one allows you to play content from a portable hard drive.

There aren’t many surprises on the back of the Panasonic, but it does tick all of the boxes you’d probably expect at this price. There’s ethernet for a wired internet connection (recommended if you’re streaming via the player’s built-in apps) while twin HDMI outputs give added flexibility for owners who prefer to split the picture and sound for their display and amp.

The provision of a set of 7.1-channel analogue outputs isn’t vital given the specifications of modern AV receivers, but it’s nice to have added flexibility should your system need it.

Unfortunately, you won’t be able to use the Panasonic to help revive any old SACD or DVD-Audio disc collections – neither of these formats is on the spec sheet. But it will handle the full gamut of surround sound codecs found on modern 4K Blu-rays and streaming services, including Dolby Atmos and DTS:X.

The DP-UB820 also covers all the necessary bases where HDR (high dynamic range) formats are concerned. There’s HDR10 and Dolby Vision support out of the box, and HDR10+ support too. If your TV supports these formats, the Panasonic will be happy to oblige. The same can’t be said for a number of rival manufacturers’ players. HDR10+ content is still relatively thin on the ground, but it’s starting to appear on more 4K Blu-ray releases plus select content on Amazon Prime Video.

Like its more expensive sibling, the DP-UB9000, the DP-UB820 is powered by Panasonic’s clever, second-generation HCX (Hollywood Cinema Experience) picture processing engine. This means it can call upon the chip’s HDR Optimiser, which Panasonic claims will improve tone-mapping in an HDR picture with static metadata. It takes into account the brightness limitations of your display and tweaks the image to extract the most detail, particularly in whites and bright scenes.

A press of the ‘HDR Setting’ button on the remote also gives you the option of tweaking the HDR intensity to compensate for different lighting conditions. The brighter your room, for example, the harder it can be for the extra punch of HDR to make a mark.

If you are watching content in Dolby Vision, which already uses dynamic metadata, the deck recognises this and will bypass the Optimiser completely. If required, the player can even downconvert HDR to SDR, which can be useful if you’re running a 4K projector that doesn’t support HDR.

All the key catch-up and on-demand video streaming services are at your disposal, including BBC iPlayer, Netflix and Amazon Prime Video. Not exactly a big deal if your 4K TV already has them, but handy to have if you’re plugging the Panasonic straight into a projector, which is likely pretty dumb by smart TV standards.

We fire up the player with Blue Planet II in 4K and HDR10. We head to the Galapagos Islands, where we’re greeted with a detailed and sharply drawn volcanic landscape. The picture proves to be as vibrant and immersive above sea level as it is below.

As marine iguanas nibble away at vegetation on the sea floor, the Panasonic picks up an impressive level of detail on their skin, claws, face and even the fine lines that separate their teeth. They convene on a sun-kissed clifftop, where the DP-UB820 paints an eye-catching and immersive picture.

There’s a sudden burst of vibrant colour as a crab appears to feed on dead skin from the iguana’s back. The crab’s reds, oranges and bluey-whites appear punchy, contrasting with the darker skin of their hosts.

We switch to Aquaman in Dolby Vision and the Panasonic raises the bar even higher. As the pirates arrive to board the Russian submarine, the headlights and the red landing lights on their underwater submersible punch through the murky depths.

As the action moves inside, the muzzle flash from a machine gun lights up your screen with concentrated and precise explosions. There’s a real sense of intensity to each blast. The clean, noise-free picture looks realistic and easily draws you in to admire details and textures in the black suits of armour.

The Panasonic delivers stable Sicilian rocky outcrops, adorned with rich green foliage – and combined with the bluey-green hues of the sea, it makes for one inviting picture. The player gives the rays of sunshine impact, but doesn’t overplay the sun-kissed scene as Arthur and Mera wander around the village market.

The DP-UB820 is a decent upscaler too. The original Transformers movie on Blu-ray is a stern test – there’s plenty of noise and the colour balance has a warmish tint – but the Panasonic does a good job of working the picture into something watchable.

The Panasonic compliments its exciting picture with a sound to match. The DP-UB820 delivers a weighty and powerful performance that’s capable of delivering explosions with plenty of gusto, but also in a controlled manner.

It’s a more muscular and grown up sound than many budget players, with rich dialogue irrespective of whether the scene is quiet or characters are caught up in an avalanche of surround effects.

We spin the Dolby Atmos soundtrack to Spiderman Homecoming on 4K Blu-ray and head to the chapter where our intrepid hero meets the Vulture for the first time on the Staten Island Ferry.

As the Vulture’s high-tech weapon rips through the ship, the laser pulses with weight and purpose as it tears through the ferry’s metal structure. The Panasonic delivers each slicing blow with with plenty of force before one final huge pulse puts an exclamation point on the whole scene. It’s an exciting performer that doesn’t struggle to hold your attention.

It’s a similar case with music playback too. During Inception, as the team attempt to breach the snow fortress, the orchestral score kicks off with a weighty and deliberate swell of sound, setting the tone for the action that follows. There’s a weight and depth to bass notes that adds to the drama unfolding in front of you. The Panasonic could be a bit more communicative with subtle low-level shifts and swings in dynamics, but otherwise it’s an accomplished performer.

If you’ve bought into the 4K Blu-ray format and have a suitable home cinema set-up, you need a dedicated player that can deliver on multiple fronts. The Panasonic DP-UB820 is just that, supporting all major HDR formats, delivering a hugely immersive and impactful picture, backed up by a strong audio performance. At this price, it’s a great buy.