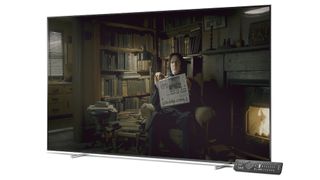 As the AV world tries to get a handle on Dolby Vision and HDR10, don't forget the recent arrival of yet another HDR (High Dynamic Range) format, designed to beat Dolby Vision at its own game.

We're taking about HDR10+, a format created by Samsung, a brand that sells more TVs around the world than any of its rivals.

But is this new HDR format a cause for celebration or consternation? On one hand, it muddies the already-confusing TV-spec waters and is taking an age to come to fruition where content is concerned. But, on the other, HDR10+ looks and sounds great and seems to be getting all the support it needs.

Like Dolby Vision, HDR10+ is all about adding dynamic metadata to the HDR signal.

Standard HDR10 uses static metadata, which means the boundaries of brightness are set at the start of a film or show and don’t budge for the duration.

These boundaries have to be broad enough to display every scene of the film – essentially, the TV’s 1.07 billion colours are spread evenly across that entire brightness spectrum, which means that if a scene contains only bright or only dark elements, only a portion of those colours are available for it. This can result in dark scenes looking a bit dim and bright scenes losing detail.

With dynamic metadata, those brightness boundaries can be set and changed on a frame-by-frame basis, so the full colour range can be deployed even in scenes that contain only dark or only light elements. The result, in theory, is subtler gradients and therefore more detail.

We’ve already seen this in action with Dolby Vision. The Power Rangers 4K Blu-ray is noticeably improved in Dolby Vision when compared to HDR10, particularly in regard to bright lights in otherwise dark scenes and subtle details in bright areas of an image. In short, it’s a more exciting, enticing and nuanced picture.

How is HDR10+ different to Dolby Vision?

At their core, HDR10+ and Dolby Vision are similar – they both use dynamic metadata to tweak a TV’s performance to get the most out of every frame – but there are key differences.

For a start, while TV manufacturers and studios have to pay Dolby to license Dolby Vision, and therefore have little control over its development and implementation, HDR10+ is a royalty-free, open format that any company, including Samsung’s rivals, can tweak and deploy as it sees fit. It's not entirely free; there is a “nominal” annual administrative fee for the companies wanting to use it.

This should make it appealing to those who don’t want to pay a high fees or hand over control of the process in order to introduce support for dynamic metadata.

Similarly, Samsung claims because the TV manufacturers have more control when it comes to HDR10+, they can more effectively tailor it for different models in their ranges.

According to Samsung, mid-range TVs benefit most from the addition of HDR10+ because the format allows them to adapt the image to models with a more limited brightness spectrum to suit their abilities.

On the other hand, as a layer of dynamic metadata for HDR10, HDR10+ carries over the limitation to 10-bit colour depth. Dolby Vision goes up to 12-bits, making it capable of reproducing billions more colours.

With 12-bit TVs still the stuff of fantasy, this isn’t a big deal yet - but when they do finally become reality this could be a big differentiator. Of course, there’s every chance that new, open formats (HDR12 and HDR12+, perhaps?) will also arrive at that point.

Is HDR10+ actually any good?

HDR10+ is currently limited to Amazon Prime Video on select Samsung TVs and a limited number of Ultra HD Blu-ray discs including Bohemian Rhapsody  and Alien 40th Anniversary, but we’ve been unable to conduct our own tests of the format. We have, however, seen the tech as presented to us by Samsung and Panasonic. While demos such as this can’t be relied upon to draw firm conclusions, they’re certainly enough to get us excited.

Next to a standard HDR10 image, HDR10+ seems punchier, more dynamic and adds more depth to the picture - but, importantly, doesn’t alter the fundamental character of the picture. The whitest elements and brightest colours look brighter, while the blackest areas become more pronounced. But nothing becomes overblown or unrealistic.

In fact, in many areas there’s greater nuance and detail – bright skies that are over-saturated in HDR10 reveal subtle gradations of colour and thin, light-grey clouds in HDR10+.

These are exactly the type of improvements we expect to come from the introduction of dynamic metadata, and the fact HDR10+ offers improvements over HDR10 isn’t much of a surprise.

The more interesting question is how it compares to Dolby Vision. This is a difficult one to answer though - to do this test properly, you need the same piece of content encoded in both formats, a TV and player that also support both and the ability to switch between the two types of HDR. We're hoping this might be possible with some of 2019's new 4K TVs.

Ever since CES 2018, the number of devices supporting HDR10+ has grown at a steady rate.

As you might expect from the format founder, all Samsung's key 2019 4K TVs support the format, some Samsung 2018 TVs, including its Premium UHD and QLED TVs support it too. If the format survives, it's safe to say compatibility will be standard across Samsung's future TVs.

As for legacy models, all of Samsung’s 2017 HDR TVs have a picture-processing engine that supports HDR10+ too, but a firmware update is needed to activate the feature.

To the smaller screen, and Samsung has also included HDR10+ compatibility in its Galaxy S10+ and S10 smartphones. Not only are you be able to watch eye-popping content on the go, but the phones are also able to record video in HDR10+.

Along with Samsung and 20th Century Fox, Panasonic is one of the three founding members of the HDR10+ Alliance, so it's not surprising its 2019 4K TV line-up all support HDR10+.

In fact, almost all of its 2019 sets support both HDR10+ and Dolby Vision - Panasonic is the first TV brand to cover all HDR bases in this way (with additional support for standard HDR10 and HLG). We were originally told that HDR10+ would be the default should the TV receive a signal that supports both, but at a recent event for the launch of the GX800 it was suggested that the opposite would be true and that the TV would favour Dolby Vision. We'll only know for sure once we've tested on of these new models.

Owners of the Oppo UDP-203 and UDP-205 will be happy to know that these players have recently received a HDR10+ firmware update.

We'd have expected the fee-free nature of HDR10+ to make it a no-brainer for many manufacturers, but would LG (Dolby Vision's biggest TV supporter) even consider supporting a format created by its arch-rivals? Despite LG being the champion of broad HDR format support so far, we think it seems very unlikely.

Just before Christmas 2018, Samsung announced an expansion of the HDR10+ ecosystem to 45 partners, including Hisense, TCL (both of whom already support Dolby Vision) and Qualcomm, so we should expect more device support moving forward.

While it would be easier if there was just one HDR format, there’s nothing stopping TV manufacturers and content producers from supporting both. Those that do (such as Panasonic in the TV arena) will almost certainly have an advantage unless one format manages to kill the other. Game on.

So what can you watch?

20th Century Fox’s early involvement importantly put a content producer on the map, and both it and Warner Bros. home entertainment have launched over 100 HDR10+ titles to market, including Bohemian Rhapsody and Alien 40th Anniversary.

Before Christmas 2018, nature documentaries A Beautiful Planet and Journey to the South Pacific were released in HDR10+ on Ultra HD Blu-ray in the USA. They also happen to be the first IMAX Enhanced discs available.

The format is already accessible on Amazon Prime Video in the US and UK as well as owners of the Amazon Fire TV Stick 4K. As the format doesn't tend to be flagged by the device or TV app, however, it can be hard to verify what you're watching is actually in HDR10+ - at the moment, anyway.

Rakuten TV, a European online streaming service and also a HDR10+ partner, will be bringing HDR10+ content to its TV app for Samsung TVs in the first half of 2019.

Despite growing industry support, recently confirmed compatibility for more hardware, and the firming up of certification for devices (which will be performed by a third-party testing centre, with certified products naturally bearing the new HDR10+ logo), the number of HDR10+ releases still lags behind those in Dolby Vision.