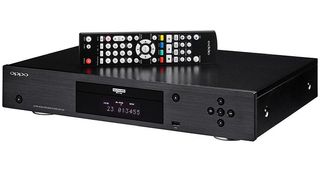 Just before Christmas, reports suggested that Oppo was considering a HDR10+ update for its UDP-203 and UDP-205 4K Blu-ray players.

Despite the Chinese electronics company announcing it was ditching its home cinema business last summer, it promised its players’ firmware would “continue to be maintained and updates released from time to time”.

It appears to have kept its word, since releasing a Dolby Vision update (compatible with select TVs). And now, as suspected, support for another HDR format has arrived.

Just before the New Year, Oppo launched a new public beta test firmware update for HDR10+ support, meaning owners of either player and a HDR10+-compatible TV should be able to take advantage of the HDR10+ Ultra HD Blu-rays expected to eventually hit the shelves this year.

According to Samsung (founder of the HDR format), HDR10+ partner Warner Bros. plans to have over 100 titles available for digital distribution in HDR10+ by early this year. While distribution of these titles is likely to be through video streaming services such as the HDR10+-supporting Amazon Prime Video, we’d hope a number would also make it to the disc.

The Oppo update, more information on which can be found here, also brings additional tweaks. The ‘HDMI IN BYPASS’ mode for Dolby Vision passthrough via HDMI has been added, and ‘general fixes and disc compatibility improvements based on recent and upcoming UHD Blu-ray releases’ have been made.