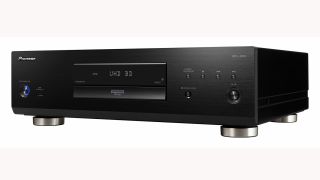 Last month, Pioneer announced its first premium 4K Blu-ray player, the UDP-LX500 (£1000). But ever since the company first teased it back in April, we’ve suspected there would be not one but two models - we’re no Sherlocks, there was a second uncovered box in the teaser image's background.

And indeed there is. Pioneer has today announced its flagship UDP-LX800 4K player, which will follow its sibling in October for a wallet-busting £2200.

As you'd hope for the asking price, Pioneer has worked even harder on the UDP-X800’s construction to maximise its structural integrity and limit vibrations, with everything from the 4.6mm thick, double-layer steel and steel-sheet chassis to the Blu-ray drive that’s housed in a rigid, anti-vibration paint-coated case.

Pioneer has also inserted a rigid frame structure inside the player to contain each of the three ‘blocks’ that separate and segregate the power supply, processing and analogue audio sections to reduce electromagnetic interference between them.

The UDP-LX800 negates ventilation holes in the top and side panels to limit noise leakage from the transport mechanism, and its spring-damped tray aims to isolate the disc.

Pioneer claims to have also reduced digital noise on the main printed circuit board, which it says makes the most of the high-speed signal transmission capability of Ultra HD Blu-ray discs.

Like the UDB-LX500, the UDP-LX800 features twin HDMI outputs, presets for SDR and HDR content, Dolby Vision support and compatibility with Pioneer's trademark PQLS (Precision Quartz Locking System), which can be used with compatible Pioneer AV receivers to improve the accuracy of the signal information being sent from the player.

Additionally, a ‘Transport Function’ cuts the power to the analogue audio transformer circuit when connecting with HDMI, with only digital circuitry being fed power, while a ‘Direct Function’ turns off the digital audio and video circuits for enhanced music playback.