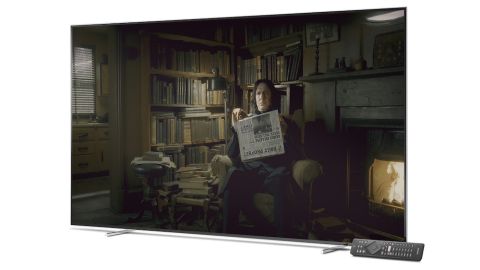 With the bugs now squashed, the Philips 803 is the most convincing argument yet against buying an LG OLED

Having absolutely loved Philips’ first OLED TV, the 55POS9002, we had high expectations indeed for its successor, the 55OLED803.

Unfortunately, while the picture matched, and even exceeded, those expectations during our first test in September, our first sample, rushed to us in order to meet our Awards deadline, had some horrible software bugs that badly marred the experience.

Philips claimed these issues were simply down to a faulty sample and supplied a fresh set for a re-test. Now we’ve put this second 55in sample through its paces, even subjecting it to long-term, daily use, we’re happy that the bugs have been sorted.

That’s exciting, because the Philips 803 really is a stunning performer – one that might just make you think twice before forking out on a 2018 LG OLED.

Things get off to a cracking start, because the 55OLED803 is one of the best looking TVs we’ve tested. The two dainty feet are simple, supremely stylish, and keep the screen low to the furniture upon which it’s standing. It’s a really elegant set, and one that in some ways looks smaller than it is (the uniformly thin bezels help), which may suit those who don't want a screen to dominate their room.

As with all OLEDs, the Philips’ screen is exceptionally thin, but that slimness isn’t universal. The connections and processing components are housed in a plastic casing bolted to the rear of the panel. The casing is bulkier than that of many rival OLEDs, presumably on account of the addition of the Ambilight LEDs. However, the trade-off is obvious from the moment you turn the telly on and begin to soak in the glow of Ambilight colour emanating from the TV onto the wall around it.

We have extolled the virtues of Ambilight before, and it works its magic here, providing a beautiful effect that draws the eye into the image and makes the screen seem bigger than it really is.

There are two remotes in the box, the smaller of which continues the angular wand-like design of the set’s feet. This is a stripped-back zapper with a few symbols in the place of normal buttons, and a glossy stripe that acts as a touch-sensitive panel for navigating menus. In a mash-up of Harry Potter and The Hitchhiker’s Guide To The Galaxy, this is what Marvin’s wand would look like.

But while it looks cool, this wand is perhaps a little too stripped-back and proves a little fiddly, particularly when attempting to access more advanced features and controls.

The second remote is much bigger and more fully featured, to the extent that it even has a full QWERTY keyboard on the rear. It’s a bit cluttered, but we prefer this zapper for everyday use.

Thankfully, the bugs that afflicted the wand’s touch-panel and bigger remote’s keyboard in the first sample don’t rear their ugly heads when using our second 55in sample. However, the fact that the QWERTY keyboard works in some apps and not others can be a bit annoying.

The more serious bugs that caused our first sample of this Philips set to crash during testing have been dealt with, too, and our experience with the second 55in sample has been much more in line with what we’d expect from a high-end Android TV set.

But while reliability is much improved and the Philips is fairly fluid in use, Android TV is still the usual blend of positives and negatives. The general clutter and unattractiveness of the OS is improving with each update, but still falls a long way behind Samsung and LG’s bespoke operating systems.

There are gaps on the app front, too. ITV Hub and All 4 are both missing from Android TV. Sony gets around the issue by including YouView in its models – it’s a shame that Philips hasn’t taken the same approach.

And content from Google Play Movies & TV plays in 4K but without HDR, despite labelling to the contrary. This is an issue with Sony’s TVs too, though. At least Netflix and Amazon Prime Video are present in full 4K HDR, and the Philips’ array of other apps includes BBC iPlayer, Rakuten (up to 1080p), YouTube, Plex, VLC and Spotify. It's also worth mentioning there's no support for Dolby Vision.

The most recent Android Oreo update has added Alexa voice control if you have an Alexa-enabled speaker. This can be linked to the TV via the Amazon Alexa app which is found in the 'apps' list accessed by clicking on the red circle in the top left corner of the screen - do this, and the app will walk you through the simple set-up process. We easily connected an Amazon Echo Dot which can then be asked to turn the TV on or off, change the channel or volume, or switch input.

MORE: OLED - everything you need to know

In terms of physical connections, there are four HDMI sockets (although only two are HDCP 2.2 compliant), two USBs, an optical output and a headphone connection, plus one aerial connection and two for satellite. It’s worth pointing out that the satellite tuner doesn’t support Freesat, so you instead get an unsorted and patchy selection of channels.

Under the hood is Philips’ new P5 chip, which the company says brings benefits to colour, contrast, sharpness, motion, noise-reduction and upscaling, and also upconverts SDR content to HDR-like quality. Combined with the latest, LG-sourced OLED panel, which offers a 10 per cent increase in peak brightness over last year’s model and a more advanced pixel arrangement, that should make for a very impressive picture.

We play the 4K Blu-ray of Blue Planet II and, sure enough, the Philips impresses. The open ocean from where David Attenborough introduces the series is invitingly, iridescently blue, while his yacht is crisp, bright and brilliantly white, to an extent that even the LG C8 can’t match.

Tropical islands viewed from above are lusciously green and vibrant, and the denizens of the deep are revealed with crisp definition and superb detail.

There’s superb overall contrast, too, with those bright, pure whites and vibrant colours combining with perfect, inky blacks to produce a dramatically dynamic picture. This is an image that entices the eye and pops from the screen.

A switch to another 4K Blu-ray test favourite Guardians Of The Galaxy Vol. 2, continues the fine form, with the set’s contrast once again working its magic to make the metallic portions of the Sovereign homeworld look sparkly, solid and detailed. The lovely colour vibrancy continues, too, delivering the full, gleaming-gold ostentatiousness of the throne room.

There is still a fair bit of blur with this setting, leaving Sony alone at the top of the motion processing pile, but the Philips is at least as capable with motion as its rivals from LG and Panasonic.

Philips has also sought to address the issues we raised with skin tones, which occasionally appeared a bit pale and flat on our original sample. On the new sample they’re definitely improved, with a little bit of rosy realism creeping in. The best still do this better, though, and every now and then you’ll notice a face that looks peculiarly grey.

Switch to 1080p and we’re not overly enamoured with the Perfect Natural Reality mode of which Philips is so proud. Like many such features designed to upconvert SDR to HDR, it feels a bit artificial and over the top. It’s simply too bright, even on the minimum setting. Dynamic Contrast has a similar effect and Video Contrast is set too high by default, too.

But once you rein these settings in, this TV produces an absolutely lovely upscaled picture. Detail is genuinely superb: play the final scene of Fantastic Beasts And Where To Find Them and the Philips reveals goosebumps on Tina’s neck as Newt touches her hair. On an LG C8, they are nowhere to be seen.

And if you think that by switching off those advanced processing modes we’ve ended up with a dull picture, you’d be wrong: whites are brighter and purer than they are on the LG, dark detail is superb and blacks are inky as can be. All told, this is one of the best 1080p pictures currently available, which is quite some feat.

Take another step down the signal quality ladder, and standard-def is also solid. LG’s OLEDs will give you a smoother, cleaner image, but the Philips is significantly more detailed.

Gamers might be slightly concerned to hear that we measured the 55OLED803’s input lag at just under 39ms, which is higher than that of rival sets from the likes of Samsung and LG. Though anything under 40ms should be fast enough for all but the most hardcore gamer, it’s worth bearing in mind..

Of course, if you take sound seriously, you should really budget for a dedicated sound system to sit alongside your new OLED, in which case the pros and cons of your prospective new telly’s built-in speakers will be irrelevant

Philips has put admirable effort into upgrading the sound system of the OLED803 over its predecessor, with a simple 2.1 system having been replaced by a pair of units with separate tweeters and mid-range drivers, and the addition of two passive radiators flanking the woofer on the rear of the set.

The improvements to weight and tonal balance are clear: by TV standards, this is a deep, rich delivery, where clarity is combined with smoothness.

That makes the Philips pleasant to listen to, but it lacks a bit in terms of punch and dynamics. That’s not an issue when it comes to everyday TV viewing, but the delivery is a bit too flat to fully convey the excitement of an action movie.

The Philips 55OLED803 is a brilliant TV. In some ways, it’s better than the LGs with which it shares a panel, particularly in terms of colour vibrancy and detail.

Skin tones still occasionally seem a little off and a premium Sony will do an even better job with motion, but these are minor flaws in an overall excellent picture performance.

What’s more, with the bugs of the first sample we tested no longer proving an issue, you're free to enjoy that excellent picture without fear of the set crashing – and we’re free to give the TV the five-star rating it clearly deserves.

See all our OLED TV reviews