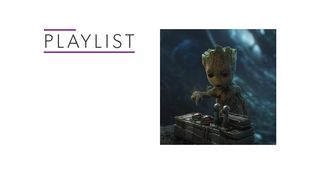 Guardians of the Galaxy Vol. 2 is Disney’s first 4K Blu-ray release, making it the last of the big Hollywood studios to make the jump from Full HD to 4K.

The House of Mouse appeared reluctant to enter the 4K fray too soon, the understanding being it was waiting for Dolby Vision. But now that it has, was its first release worth the wait?

Vol. 2 sees the Guardians recognised as heroes after their exploits in the first film. Hired by the Sovereign race to defend their planet’s valuable batteries, things turn sour when Rocket steals some batteries, causing the Sovereign fleet to attack.

They’re rescued by Ego (Kurt Russell), who claims to be Quill’s father and invites them to his planet so that Peter can learn about his lineage. Peter wants to get to know his 'space dad', but others are wary of Ego's intentions.

The plot is further complicated by the Sovereign race wanting revenge on the Guardians, enlisting the Ravagers (led by Michael Rooker’s Yondu) to capture them.

Writer/director James Gunn opts for a similar tone, but with a rhythm that’s a little different. There’s more characterisation, more depth and more of an emotional current running in this film, as it delves into the backstories of several characters.

It's good to see a film that places its characters front and centre, but this approach causes a few nagging issues.

With the emphasis on the main characters, other elements are marginalised. The Sovereign race (led by Elizabeth Debicki’s Ayesha) are fun, but they’re on the periphery and don't feel fully integrated into the story.

The pacing is not helped by the transparency of the plot. We’d be surprised if you couldn’t guess Ego’s intentions early on, and waiting for the penny to drop in the film just adds to the sense of wheels spinning.

Despite that, Vol.2 is a lot of fun. The characters retain a sense of humour, even when they’re being awful to each other. The Guardians occupy their own strange corner in the MCU and it gets enjoyably weird in tone, with some unexpectedly dark moments too. This includes what can only be described as a killing spree in the middle of a Disney film. You could almost hear James Gunn (given his Troma background) cackling with glee.

The new characters such as Pom Klementieff’s sweet Mantis and Kurt Russell’s charismatic Ego fit well enough. There are brief appearances by Sly Stallone (and Miley Cyrus’s voice), while Rooker gets a surprisingly emotional storyline – odd considering the first time you see him is in a space robot brothel. Rooker is predictably good, and him shouting “I’m Mary Poppins, yo” is one of the film’s more memorable moments.

Vol.2 is a fun follow up, but not quite the measure of the first film.

WhenVol.2 was announced for 4K, it was hoped it'd be one of the first Dolby Atmos/Vision titles.

Instead, the Blu-ray was released without Dolby Vision support (strangely, the 4K VUDU streaming version in US does) and despite being the first film to be shot with the RED Weapon 8K camera, the film appears to have received a 2K DI (digital intermediate).

It ranks as one of the nicer looking 2K upscales we’ve seen. The opening scene with a de-aged Kurt Russell looks softer and lighter than the Blu-ray (which looked firmer and more defined) and momentarily had us preferring the Blu-ray.

But as soon as we’re reunited with the Guardians in the opening action scene, the difference between the 4K and Blu-ray becomes apparent.

The HDR brings out golden hues of the Sovereign race, which have more of a burnished glow about them, while colours pop with more intensity. The flames in the battle with the space monster are hotter and more vibrant, with a more perceptible orange lick.

There’s much more detail and definition, which is apparent on characters such as Drax - you can trace his intricate body tattoos better. Groot’s bark has more colour and texture, and the green moss highlights atop his head are better defined.

Flesh tones are warmer, similar to what we saw with Blade Runner. The lighting within scenes looks more natural and, where the Blu-ray was a touch oversaturated in places, the 4K offers more definition and clarity.

There’s a subtlety to colour tones that makes for a spectacular and colourful image, although it also looks very busy with the amount of visual effects on display.

It’s a definite step up from the SDR Blu-ray.

The Dolby Atmos track is nicely judged, working as a frontal assault on the viewer.

LFE frequencies get a thorough workout – the space monster’s entrance in the first battle has plenty of heft as it slams onto the platform – but the clarity of the effects hold up.

Once the action sequences kick up a gear, it gets loud and busy, but the track is able to sift through the detail without missing a beat.

Positioning is well done. We like the bit in the final battle where as Quill moves around you can hear his voice go from speaker to speaker, indicative of the Atmos track creating a sense of space and depth.

The needle drops for the 80’s music appear reserved for the front two speakers, and work well in the mix (though we reckon they could be a bit more prominent). The song selection isn't as instantly memorable as the first film, but it gets you humming and tapping along.

There’s a lot of action and detail, particularly in the rear speakers. Apart from some moments, such as when Rocket ambushes the Ravagers, overall there is less use of the overhead channels than we expected. Dialogue is mainly presented through the centre speaker and is intelligible throughout.

We enjoyed our time with Guardians of the Galaxy Vol.2, even if it doesn't quite reach the heights of its predecessor. The characters offer plenty of fun, the action is good (if overlong in places) and the humour lands. And Baby Groot is adorable.

The 4K disc offers a nice looking image, with more detail, clarity and colour than the Blu-ray can offer. The sound mix can be intense, and while we hoped for more use of the height channels, it's a good upgrade.

If you’re a fan, this is the best way to watch Guardians of the Galaxy Vol.2. This is an impressive debut for Disney in the Ultra HD market, and we look forward to seeing how future titles fare.

We're 99 per cent sure you get a digital copy code inside the case (although we seem to have lost ours), and in typical Marvel fashion there are extras but not a massive amount. You'll find them on the Blu-ray disc.