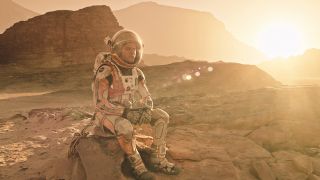 If you really want to see what your brand new 4K HDR TV and AV set-up is capable of, you'll need one of the very best 4K Blu-ray discs around.

The selection of 4K Blu-rays below includes nature documentaries, sci-fi films, musicals, drams and more and all with blockbusting soundtracks, to put your home cinema system through its paces.

Whether you want to entertain the family during movie night or marvel at some cutting-edge picture quality, slide one of these 4K Blu-rays into your player and let the film do all the work.

One of the best visual experience available in 4K HDR, Seven Worlds, One Planet is yet another staggering achievement from the BBC's nature documentary team. Voiced by the inimitable Sir David Attenborough, the continent by continent format is slightly irrelevant but it makes absolutely no difference. It's yet another marvellous excuse to bring us the best looking set of big cat hunts, mating rituals and migrations around right now.

It's filmed across a huge variety of landscapes - mountains, jungles, deserts, grasslands, cities, arctic tundra - each with thistle-sharp definition and its own incredible palette of colours. If we had to call a favourite, it would be the cheetahs but it's all bloomin' amazing and is arguably the very best 4K Blu-ray disc for testing your system from top to bottom.

Sam Mendes’s World War I film is an incredible technical achievement that’s designed to look as if it’s composed of just two consecutive camera shots. It’s also an absolute belter of a test disc that throws challenge after challenge at your system.

The greatest of these is to your display’s motion processing. The film is jam-packed with slow pans over the decimated French countryside. There are very few TVs and projectors out there that can handle those without a fair bit of judder and/or blur. Colour is thin on the ground but the open flames seen later in the film should be vibrant, toasty and bright against the darkness.

This is a truly sumptuous disc that will give your whole system a workout right from the first frame. That uncomfortable close-up of an eye should be stunningly detailed and strikingly blue, and the overhead pans across the concentrically arranged solar farms are a stern test of your display’s motion processing.

The scenes in downtown LA are an excellent way to test your TV’s contrast: you’re looking for differentiation between the inky blacks and grey smog, plus bright, vibrant colours from the neon signs and holographic advertisements.

The soundtrack is just as challenging. The Hans Zimmer-composed, Vangelis-like score is full of deep, bold, oppressive bass frequencies that the average TV and even soundbar will find impossible to recreate, and that will cause a poor quality subwoofer to warble or rattle.

Dunkirk is a film of scale - the gigantic wide shots of the never-ending Normandy sky; the enormous sweeps of the huge, flat beaches; the sheer number of soldiers stranded on the barren sands; the extra big 65mm IMAX film that Christopher Nolan used to shoot this wartime epic. Pop this in your player and you'll know why you bought a big TV, but it's got more than size going for it.

The other watchword for Dunkirk is 'texture'. There's a kind of a dulled colour grade to the finished piece and such uniformity of hue that it makes it a brilliant playground for highly capable HDR TVs to really show off what they can do with shading. The grey clouds, the grainy beach and the choppy Channel become characters all of their own.

If Dunkirk is texture, then Guardians 2 is all about colour. You can rely on many of the Marvel films to have a good, even balance of colour and, set in space, filled with aliens and featuring one main character with bright green skin and another in bright blue, this one has got to be the most vibrant in the MCU.

After a brief opener in Missouri, it's one of the most vivid films you'll find. From the stunning gold of the Sovereign to the Kaleidoscope of Ego's World, it's a feast of colour. The 1970s/80s soundtrack is also a great one for testing the music ability of your AV sound.

From colour to contrast - the harsh, cloudless glare of the sun moving through the Martian sky makes for some incredibly stark lighting in the many exterior shots of this film. The various oranges of the planet's surface are struck by patterns of pitch dark shadows, giving your TV a real test of how well it can render images of very bright and very dark areas at the same time.

Once inside the Mars habitat, there's then a great opportunity to appreciate how well your set can handle white details with all the NASA suits and equipment mostly white and light grey.

There's a slight grey kind of grain to this film and the colours are a little muted but it's the dark detail you're here for. There's not an awful lot of daylight in this film at all. What little there is comes mostly from the revisited freeway crash scene which is itself an excellent test of dark detail with all the black cars and henchman outfits, anyway.

This film is mostly shot in dingy bars, even dingier bad guy laboratories and the odd low-lit apartment, and if your set isn't showing you much action, then it's probably time to buy a new one. Most of all, though, you should buy Deadpool because it's one of the funniest and well put together superhero films out there.

The film version of Yann Martel's Man-Booker Prize winner pushes every AV slider up to the max. It's all supposed to look a little unreal and that's partly done by pushing the colours through the roof and using visual effects perhaps a little more than most filmmakers would consider wise.

It's not one to calibrate your set by but it needs to look magical without coming across too plastic and fake. The shots in the lifeboat should start making you a little bit queasy, the Piscine Molitor must be a place you need to swim, and if you don't develop a healthy fear of 300lb Bengal tigers, then your TV's not doing its job.

This old-time style film musical is what big screens were made for. The countless wide shots, the large scale choreography and so much of the action set on huge stages in front of enormous crowds - it should all snap into focus when watched in 4K HDR on a capable system.

Bigger still, though, is the soundtrack. Naturally, we'd advise at least a soundbar to go with your TV.  Otherwise, anything less than the very best TVs for audio will not do this film justice. A lack of precision will be terminal for a sense of clarity and rhythmic drive, and it's all too easy for most sets to boost bass at this expense. If you're in any doubt, try playing the soundtrack on your hi-fi and see what it should be like.

The Oscar-nominated comic book film gets a cracking 4K release as Hugh Jackman's Wolverine/Logan bows out in style. Logan is an unflinchingly brutal, violent and bleak - but surprisingly colourful - film.

Despite the serious subject matter, and going against the grain of dark, cool-toned superhero films, most of the film has a lovely sense of warmth, texture, and richness. It's shot digitally, but Logan has a film-like quality that remains sharp and clear. The Atmos mix has plenty of bass and detail, too, making for an atmospheric, energetic, and at times moody track.

Sony and Marvel teamed up to reboot Spider-Man yet again and finally got it nailed with Tom Holland in 2017. Despite reverting back to Peter Parker's teenage years, it's a fresh and engaging take in which the school scenes are as good as the action.

It presents a typically natural but rich Marvel colour palette with no stylistic grading to get in the way of a film shot nice and sharp. The Staten Island Ferry sequence is the one we come back to again and again for testing both picture and sound. It's bright, fast moving and fun with plenty of Atmos effects across a very broad and busy soundstage.

It's over 20 years old, but there's still something so unique about The Matrix that no other film has ever been able to replicate. If you've forgotten just how groundbreaking and stunning this film is, you owe it to yourself to get it on 4K Blu-ray.

Detail is just incredible at times, very sharp and revealing, and the epic corridor sequence is still an excellent showcase. Colours are far from natural but strong in a deep and vivid way that produces a rich, textured look. We're happy to follow that white rabbit again and again and again.

Director Edgar Wright returns with another kinetic and idiosyncratic film in the music-obsessed Baby Driver. The real draw is the integration of soundtrack into the narrative – Wright cleverly weaves musical motifs with the action on screen, with the film having as much in common with a musical as a classic heist film.

At the centre of this Oscar-winning film is a lonely, mute janitor at a top-secret laboratory, who falls in love with an amphibious creature. Unusual, but this has sprung from the inventive mind of Guillermo del Toro (Pan's Labyrinth, Hellboy, Mimic, Crimson Peak) whose imagination runs visually wild while still drawing you in with engaging characters and a story full of pathos.

More to the point, it looks ravishing in 4K, bringing the grim 1960s setting and fantastical elements to life with lush detail, beautifully contrasting colours and rich textures. There's no Atmos or DTS:X soundtrack here, but Alexandre Desplat's score is sweeping, whimsical and emotional at turns.

Keep your Marvel, Star Wars and John Wick universes - Paddington is easily the most consistent film franchise. The sequel retains the endearing optimism, warmth and gentle humour of the first film, adds in witty and slapstick performances (Hugh Grant is at a career high here) and packs some unexpected emotional punch at a crucial moments.