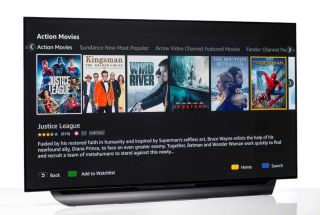 LG's first OLED TV arrived in 2013, and ever since the brand has blazed a trail for the eye-catching TV tech that promises stunning picture quality. LG's 2018 OLEDs are some of the best TVs the Korean giant has ever produced, but they're now a year older and, we're starting to see them show up with some pretty tempting discounts.

There are five different ranges to choose from and two or three different size options in each. So which 2018 LG OLED TV should you buy? What are the differences between them? And which is the best value LG OLED TV?

Read on and we'll answer all these questions and more to help you pick out a bargain 2018 LG OLED TV.

Considering a newer LG TV? Here's our rundown of the class of 2019.

LG's model structure for 2018's 4K OLED TVs is similar to the approach taken in 2017 - the only difference being the '7' has been replaced by an '8'. There are five ranges in total, starting with the B8 entry-level line, followed by C8, E8 and G8, and ending with the wafer-thin W8 "wallpaper" OLED.

C8 to W8 all use LG's new custom-built Alpha 9 picture processor, while the B8 sets have a new version of LG's Alpha 7 processor from 2017.

All of LG’s 2018 OLED TVs support a wide variety of HDR formats, including HDR10, Dolby Vision, HLG and Advanced HDR by Technicolor. There’s no 3D support, but we have found the 2018 sets to be among the best when it comes to gaming.

LG claims the Alpha 9 delivers big improvements in noise reduction, sharpness, depth enhancement and colour reproduction. And, from what we've seen during our OLED55C8PLA, OLED65C8PLA and OLED55E8PLA reviews, we have to agree. Even the OLED55B8PLA doesn’t seem to be overly hampered by its lower spec processor.

While the OLED panel technology remains largely consistent between models, the main differences relate to aesthetics and speaker set-up. The stand designs vary between models with some using built-in speakers and others using a separate soundbar to handle audio.

The W8, for example, hangs on your wall like a picture frame and comes with a large external soundbar-cum-receiver which attaches via a slim umbilical cable.

It’s worth noting two different versions of the LG B8 OLED exist: one with a ‘PLA’ suffix and another with ‘SLC’. LG tells us the differences between the two sets are the stand design (Alpine on the 'PLA' versus Crescent on the 'SLC'), the speaker configuration (2.2 versus 2.0) and power output (40W versus 20W). We haven’t yet been able to test an ‘SLC’ B8 so, for now, we’ll have to take LG’s word for it.

On paper, it’s very close. There’s around £500 between the two LG TVs, and this might be enough to sway you towards the B8. And understandably so.

However, our money would go on the C8, which brings a number of subtle improvements to aspects of the picture such as detail, clarity, contrast and colour. When you add them all together, it’s enough to convince us to spend a little extra.

Of course, if the price difference was to open up further, the case for the B8 would become stronger.

While researching OLED, you’ll undoubtedly have come across Samsung’s QLED (Quantum dot Light Emitting Diode) TVs. And, you’re possibly wondering a) what’s the difference between the two technologies? and b) which is better?

The first thing to note is QLED isn’t simply the case of swapping a letter - it uses LCD panels, a completely different TV tech compared to OLED. You can learn all about it on our page dedicated to explaining QLED.

Suffice to say, both technologies have their own strengths. Generally, OLED TVs tend to boast more impressive black levels, while QLEDs tend to produce a brighter overall image with more vibrant colours. It really is horses for courses - some people might prefer the balance of QLED, while others might opt for OLED.

We’ve compared Samsung’s premium Q9FN range to LG’s C8 series, and there isn’t much between them. The C8 just edges it due to the TV’s more rounded performance, but the there truly isn’t much in it. Opt for either range and you won’t be disappointed.

Samsung's 8K QLED TVs are on sale now, while LG's has launched an 8K OLED in selected markets including Korea. It should make for an interesting comparison.

What about LG vs Panasonic, Philips and Sony OLED TVs?

Of course, LG isn’t the only show in town when it comes to OLED TVs. Other manufacturers including Panasonic, Philips and Sony have all come to the market with rival ranges.

Virtually all manufacturers source the basic OLED panels from LG Display, but this doesn’t mean all OLED TVs look alike. Manufacturers design their own models and build their own internals, including picture processing engines and speakers, which deliver variances in picture quality from set to set.

So who else is worth considering?

Sony has a number of LG-rivalling OLED TVs too. There’s Sony’s AF8 range and its AF9 Master Series to throw into the mix, available in 65in and 55in screen sizes.

All of these TVs have different strengths and weaknesses but currently, for our money, LG’s own 2018 OLEDs are the best around, and well worth looking out for.