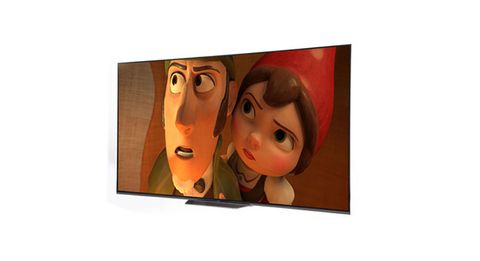 A good television, but the Sony AF8 doesn’t shine quite as bright as its superstar sibling

Launched at CES 2018, the AF8 series sits right below the current A1 range (which continues as the flagship OLED series) and comes in 55in and 65in screen sizes. According to Sony, it provides the same picture performance but, thanks to a less radical design, at a more affordable price.

But if an affordable A1 series sounds like an absolute winner to you, unfortunately the situation isn’t quite as clear cut as that.

The AF8 is powered by the same 4K HDR X1 Extreme processor as the A1, which is responsible for noise reduction and detail enhancement, along with accurately controlling all 8.3 million self-illuminating pixels on the OLED panel.

Strangely, the AF8 doesn’t have exactly the same menu settings as the A1 – for example, it lacks the option to change X-tended Dynamic Range, one of Sony’s processing modes. However, apart from that, it’s essentially the same Android operating system underneath.

Android TV is a more cluttered, less intuitive OS, compared with those from Samsung and LG, but it does offer a full range of apps and features.

Catch-up services from the major broadcasters are all here, along with streaming apps from Netflix, Amazon and Google. These can be controlled via voice assistants, which is a rather neat and welcome feature. If the smart-home is rapidly approaching, Sony users will be ready for it.

As well as support for Google Assistant (through its Home or Home Mini speakers), this television can also be controlled by Amazon’s Alexa to manage the power, volume, playback and inputs.

The AF8 has a plentiful supply of connections. For hooking up a Blu-ray player, amplifier or games console, there are four HDMI inputs – three on the back, and one on the side – capable of supporting the HDCP 2.2 codec needed for 4K content.

This is an upgrade over the A1, which has two HDMI inputs capable of supporting the highest spec 4K/HDR signals.

But the key difference between the A1 and the AF8 is in the visual design. For the AF8, Sony has opted for a more traditional, pedestal stand, compared with the A1’s easel-like form.

The KD-65AF8’s pedestal lacks some of that drama, but it means the TV has a much smaller footprint, making it a fair bit more practical for many front rooms.

We wish Sony had taken a similar approach to the remote control. The AF8’s remote is the same as the A1’s, with the same benefits and shortcomings.

It is responsive and has a button for almost everything, but that means it’s also cluttered and a little dull looking.

Sony has made setting up this television relatively straightforward. We make some minor adjustments to its dynamic contrast modes and bump the Live Colour from ‘medium’ to ‘low’, but that’s all we need to get the AF8 looking its best.

Once done, we play Planet Earth II on 4K HDR Blu-ray and are met by an impressively detailed, refined image. Sony has done a good job of transferring the level of insight available in the A1 to the AF8.

As we watch the Nubian ibexes make their way gingerly down the side of a cliff, this television shows off the texture of their fur – both in the way that it’s layered, but also the smaller individual wisps that stand out.

It does well to keep the foreground and background distinctly separate, providing depth and dimensionality to the image.

Watching a golden eagle soar across the landscape, you get a sense of the distance between the bird, the mountains behind it and the ground below. We’ve seen some televisions struggle to show a proper distinction, but the AF8 certainly doesn’t.

We play Guardians Of The Galaxy 2, and the KD-65AF8 has a steel-tight grip on every action sequence. At the end of the film, when Star-Lord battles his father Ego, the scene is awash with special effects – lightning zips from the sky, rocks launch and crumble, and rockets blare into life.

These rapid motions are tracked well by this television, with few unnatural blurs or judders to distract you.

There’s no doubt this TV can reach down to the deepest of blacks either. With the OLED technology meaning that pixels can be turned off completely, the scene when Ego is explaining his return to the Guardians in the dark forest looks even more mysterious and eerie.

The AF8 performs well with colour too; the differences between the green hues of Gamora’s skin, or the way the muddy red markings on Drax’s chest contrasts with his purple skin, makes for a satisfyingly realistic range.

But, despite Sony’s insistence that the KD-65AF8 offers the same picture quality as the A1, there are some slight differences.

It’s most notable in terms of brightness and vibrancy, meaning that the AF8 doesn’t have quite the same blow-you-away quality of the A1.

The way the light from the sun falls across Star-Lord’s face isn’t as nuanced or as bright as we would like, and the colours aren’t as rich. It’s a fine picture, but next to the A1, it’s just a bit muted.

That comes as something of a surprise, but it’s a similar story with Blu-ray and DVDs. The AF8 provides a detailed and colourful image, and upscales well to a full 4K resolution, but it is still pipped by the A1.

Instead of conventional speakers, the AF8 uses the same Acoustic Surface technology as in the A1; two actuators vibrate the panel directly (which effectively makes the whole panel a speaker driver) to deliver better sound.

Combined with a built-in subwoofer in the back panel, there’s no doubt it sounds bigger, richer and more solid than the usual tinny TV speakers. However, it’s still playing second fiddle to the qualities of the A1, which has a more authoritative, weighty character.

That's almost certainly because Sony has chosen to replace the A1's single, large subwoofer with two smaller drivers for the AF8.

The A1 is the preferred option from an audio perspective, then, but it's worth pointing out that both televisions would lose out sonically to a capable soundbar. If you're spending over £3000 on a TV, you probably owe it to yourself to invest in one, if not a full surround system.

The Sony KD-65AF8 is a very good television indeed, albeit one that doesn’t quite match its billing.

Though it is supposed to be a cut-price A1, the lower price tag doesn’t quite compensate for the difference in the picture and, to a lesser extent, sound quality.

Of course, the AF8 has just been released, whereas the A1 is a year old and so we are comparing a recommended retail price against one that’s been heavily discounted. But as it stands, the A1 costs only £300 more than the AF8, and we think that extra £300 is well worth paying.

Should the price of the KD-65AF8 fall and the gap between the two TVs widen, we might switch our recommendation to the more affordable model. But right now, the A1 is the better buy.