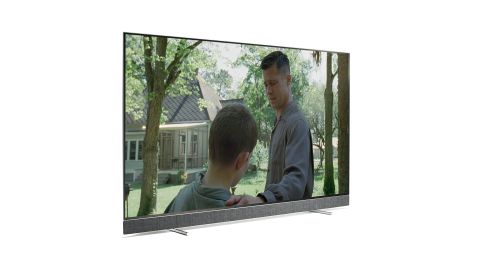 This is a fabulous TV with much-improved sound, but for pure performance it doesn't necessarily beat the cheaper model and soundbar combination

It’s fair to say we’ve been rather surprised by just how good Philips’ OLEDs have been this year. With many brands using the same LG-sourced panels, competition is fiercer than ever, but Philips stands out as the manufacturer that has come closest to beating LG’s own models.

That’s partly because of Ambilight, but mainly because Philips has nailed the picture performance, making it better than that of the LGs in some ways.

So, with the company capable of delivering some of the best pictures on the market, the only obvious area to improve for a step-up model is the audio. And if you’re a TV manufacturer looking to add a serious sonic boost, it’s logical that you’d team up with a hi-fi brand such as Bowers & Wilkins.

The Philips OLED903 then (also called the OLED903+), here in its 55in version, combines Philips video with B&W sound. That sounds like a match made in heaven to us.

Simply put, the OLED903 is an OLED803 with a soundbar attached to the bottom. That might sound like an inelegant proposition, however, in reality it’s anything but.

The thin, grey, fabric-covered speaker section at the bottom of the 903 doesn’t detract from its sleek design. In fact, it adds a little by lifting the bottom of the screen off the furniture upon which the TV is placed.

The new sound system adds just a millimetre to the overall depth of the set, and with the elegant feet removed, it is just over 5cm deep. That may not sound ‘razor slim’, as Philips describes it, but it is similar to most OLED TVs, which have to combine the OLED panel itself with a casework containing connections as well as processing bits and pieces.

With a Philips OLED, that casework is also ringed with little LED strips that form the Ambilight system. Philips’ proprietary tech extends the edges of the picture you’re watching with coloured light on the wall around the TV. It sounds like a gimmick, but not only does it look beautiful, it also draws the eye into the picture and makes the image seem bigger.

While the feature set of the OLED903 is identical to that of the 803, there are some issues. The decision to use Android TV as the operating system is a slight disappointment because, while it continues to improve with each update – the latest of which is Android Oreo – it still falls short of the bespoke software you’ll find on a Samsung or LG TV in terms of presentation, slickness, intuitiveness and customisation.

Android TV also lacks the ITV Hub and All 4 apps. Sony reinstates them on its own Android TV sets by adding YouView, but Philips hasn’t followed suit.

There are still plenty of apps to enjoy on the OLED903. Netflix is present in full 4K HDR, as is Amazon Prime Video. Subscription-free 4K movies are available to rent or buy via Google Play Movies & TV, although these lack HDR. Those with movies and TV shows stored on a NAS device or portable hard drive will be pleased to see both Plex and VLC are on board, and those looking to test the B&W sound system with streamed music will appreciate Spotify, Tidal, Deezer and TuneIn being available.

You can add Alexa voice control by connecting an Alexa-enabled speaker via the TV's integrated Amazon Alexa app. This can be found in the 'apps' list accessed by clicking on the red circle in the top left corner of the screen - do this, and the app will walk you through the simple set-up process. We easily connected an Amazon Echo Dot which can then be asked to turn the TV on or off, change the channel or volume.

The Philips supports HDR10, HLG and HDR10+, but not Dolby Vision. That’s not currently a huge issue, but as the weeks and months pass without HDR10+ properly materialising, we may well reconsider.

There are four HDMIs around the back, all of which will handle 4K HDR signals and two of which are Audio Return Channel (ARC) compatible. There’s also an optical output to connect a non-ARC sound system, as well as a headphone socket. For TV, you can use the aerial or satellite connections, although the TV does not contain a Freesat tuner.

The panel itself is the same used on LG’s own 2018 sets, which means it’s 10 per cent brighter than last year’s OLEDs and boasts a more sophisticated pixel arrangement. Telling the panel what to do is Philips’ own P5 chip, first seen on the OLED803. The company says this improves practically every element of the picture, from the colours and contrast to sharpness and motion.

The picture performance of the OLED903 is almost identical to that of the OLED803, and is actually a punchier picture than the LG, with which it shares a panel. Play Ready Player One on 4K Blu-ray and the bright CGI action pops from the screen, but without ever looking garish or out of control.

The three-dimensionality of the image is helped by subtle shading and the pin-sharp definition of edges, plus the astonishing contrast afforded by bright whites and those vivid colours on near-perfect blacks that only OLED can recreate.

Detail levels, meanwhile, are exceptional. This may be a largely computer-generated film, but it’s packed to the rafters with subtle touches and textures that other TVs may miss. But, like the OLED803, the 903 can be a little off with skin tones. During the ‘real-world’ action, Wade occasionally looks grey and zombie-like. It’s a little jarring, but far from a deal-breaker.

The out-of-the-box motion smoothing settings are a bit much, with occasional artefacts around tricky bits of movement and a dash of the soap opera effect. We’d recommend either switching it off, or giving the Movie option a go. The latter reduces judder and blur without making a film look less any less cinematic.

We’d also experiment with the Perfect Natural Reality setting. To these eyes its upconversion of SDR to HDR-like levels is a little artificial, but you may like what it does with some content, such as animation. We definitely recommend turning off Dynamic Contrast and reducing the Video Contrast, though.

While the 903’s upconversion of SDR to HDR is mildly unconvincing, we’re thrilled by its upscaling of 1080p and even 576p to the panel’s native 4K resolution. It’s a noisier picture than LG’s super-smooth 2018 OLEDs, but also significantly more detailed and a fair bit sharper. The 1080p picture isn’t far off 4K, and even DVDs are pleasant to watch with a surprising amount of punch.

The excellent upscaler combines with a capable Freeview tuner to make the Philips OLED903 a great TV. Again, there’s a bit of noise to the image, but that’s a more than reasonable price to pay for a detailed and dynamic image.

With the picture quality on the OLED903 being similar to the 803, the question is whether the B&W sound system is worth paying the extra for. Though the 903 does sound a lot better than its predecessor, fluctuations in the price difference between the two models complicates the issue.

Philips and B&W claim that with the 903, dialogue clarity, soundfield openness and dynamic range are all ‘notably increased’ over the 803, and they’re right. Sound is projected effectively into the room, lending voices and sound effects a directness that most TVs lack. Voices are fuller and more natural, too.

The soundstage is nicely open and spacious, which helps it deliver a degree of atmosphere that’s rare for a flatpanel telly. Play an action movie and the crashes, bangs and wallops are loud and distinct. The 803 was already full-bodied, and the 903 is even better in these areas. Bass is weighty and deep but never overbearing, and the richness doesn’t come at the expense of clarity or organisation.

However, the treble is a touch harsh and voices can be a little sibilant. It’s enough to be distracting, even irritating at times. It’s the one big issue we have with the OLED903’s sound, but there’s also the broader question of its sonic performance compared to that of a soundbar.

In some ways it’s an unfair comparison, B&W has had to work to a tighter brief here than for building a standalone sound system, but it’s an inevitable one when the only difference between this TV and its cheaper sibling is the sound.

The truth is that the best soundbars sound better, even those at the affordable end of the market. The Sonos Beam (£389), for example, is more dynamic, detailed and musical, while the Yamaha YAS-207 (£249) is crisp and spacious. We wouldn’t expect a TV to sound as good as a separate soundbar, but it’s something a buyer is likely to consider.

In terms of its picture, the Philips OLED903 is one of the best TVs currently available, and there's the added bonus of superior sound. And yet our personal preference would be to buy the cheaper Philips OLED803 and a separate soundbar. That said, for many people an all-in-one TV and soundbar solution will no doubt appeal, in which case the OLED903 is a neat upgrade option. Happily, both TVs represent great value.

How to set up your new TV