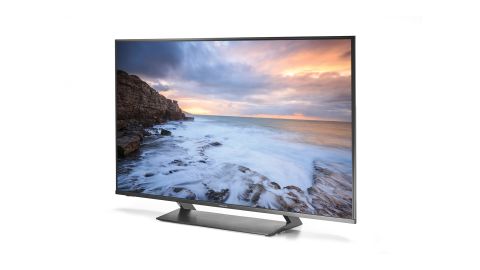 Most TV brands dedicate their energy into shouting as loudly as possible about their flagship sets. That’s understandable, as these sets represent the pinnacle of their capabilities, but it means that the more affordable, mainstream models tend to be launched with all the fanfare of a Tiddlywinks tournament. That’s why the effort that Panasonic has put into its GX800 is so refreshing.

This is the first TV we’ve tested that supports both of the two competing dynamic metadata-based HDR formats, Dolby Vision and HDR10+, and it costs just £799. Panasonic (and other brands) claim that HDR formats with dynamic metadata are of more use to lower-end sets than flagship models, as they tailor the image to the specific capabilities of the set.

It’s a compelling argument, but is the GX800 all it’s cracked up to be? Broadly speaking, it is. You won’t mistake its performance for that of a proper premium model, but this is an undeniably great TV for the money.

One note before we crack on: Currys is selling the TX-50GX820B instead of the TX-50GX800B. We've tested both models and they perform identically, but the GX820 does have a picture-in-picture mode that the GX800 does not, which could be useful if you wanted to, for example, play a console game while also watching the cricket.

The GX800 is a 4K LCD set with an edge-LED backlight. Going with edge backlighting, rather than a direct, full-array system has consequences in terms of contrast, but does also allow the set to be pleasingly slim. We’re not talking OLED levels of razor-thinness, but it’s not far off.

The design is otherwise typical Panasonic; clean and fuss-free. Some might find the utilitarian aesthetic disappointing, but Panasonic has long been determined to let the performance do the talking.

'Utilitarian' can also be applied to Panasonic’s TV operating system, called My Home Screen. The GX800 gets the 4.0 version, which is a little snappier in operation than those before it and allows for a certain amount of customisation, but still prioritises simplicity over snazziness. It’s easy to use but not a lot of fun.

On top of Dolby Vision and HDR10+ compatibility, the GX800 supports HDR10 and HLG, giving it the full suite of current HDR formats. Interestingly, Amazon Video, which is the first streaming service to feature content in both HDR10+ and Dolby Vision, prioritises the latter. In fact, HDR10+ content isn’t flagged as such either in the Amazon app or in the Panasonic’s menus, so you’re never sure if that’s what you’re watching.

Netflix is also on board in 4K and with Dolby Vision, and all of the UK’s core catch-up apps (BBC iPlayer, ITV Hub, All 4 and My5) are present. The only pay-as-you-go movie streaming app on board is Rakuten, and it isn’t in 4K or HDR, despite being labelled so. The Panasonic is also lacking the likes of Now TV, BT Sport, Google Play Movies & TV, Spotify and Tidal. As mentioned above, the Currys-exclusive GX820, which is otherwise identical to the GX800, also has a picture-in-picture mode, which is accessed via an app called Multi-Window.

In terms of physical connections, you get three HDMI inputs, two USB sockets, ethernet, component video, optical out and a dedicated headphone output, as well as an aerial socket for live TV.

The GX800 isn’t the last word in dynamism, but it provides a wonderfully natural and balanced picture. Many sets at this price tend to over-enhance the picture and exaggerate edges in order to make an impact, but the Panasonic’s smooth subtlety is preferable in the long run.

Whites are pure and colours are excellently judged, with skin tones a particular highlight, and while the GX800's slightly soft approach means images are a little less three-dimensional than they can be, detail levels are superb.

Motion is good for a TV at this price. We recommend setting Intelligent Frame Creation to Mid and switching Clear Motion off in order to get fairly crisp, judder-free motion without soap opera-like over-enhancement or obvious artifacts being added.

Blacks are pretty good, though not as pure as an OLED or top QLED TV. A little light from the main picture leaks into the black bars top and bottom, but it isn’t noticeable during normal viewing and is forgivable for a TV using an edge backlight.

However, the viewing angles are pretty poor, with blacks losing their depth and colours their lustre as soon you move off-axis. That’s far from unusual from an edge-lit LCD, but it is something to bear in mind.

Sound-wise, the GX800 is clear and easy to follow, but it’s also rather bass-light and thin, which is no real surprise given the price tag. The Atmos mode adds a bit of width and height, and is definitely worth using for most content, but at no point does the sound really stretch into the room and, as expected, a good soundbar will be a big improvement.

The Panasonic GX800 (and Currys-exclusive GX820) remains an excellent TV for the money. Not only does it have the broad HDR format support that most, significantly more expensive TVs lack, it backs it up with a natural, likeable performance with all sources. At this end of the market, it’s a real winner.

Read all our Panasonic reviews