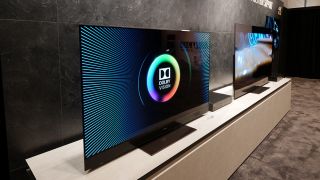 Panasonic concentrated all of its CES 2019 efforts on unveiling just one new TV: the flagship GZ2000 OLED. But just weeks later at its annual February convention, the Japanese brand revealed the rest of its 2019 TV line-up.

This year it has expanded its OLED TV range count to four (compared to 2018's three), each with a 55in and 65in variant. Those with slightly more modest new TV ambitions might be pleased to know that Panasonic has three 2019 LCD TV ranges, comprised of nine sets between 40in and 75in sizes.

All are now available in shops, and you might like to know that the three we've reviewed in the past few months (one OLED, two LCDs) have all walked away with five stars. One, the TX-58GX800B, has even won a What Hi-Fi? Best Buy award. Pana is in fine form, then.

The lack of an 8K TV in the company's 2019 range may seem like an omission, considering LG, Samsung and a handful of other TV players are making plenty of 8K noise with a set (or sets) of their own this year, but considering the fledgling state of 8K play across hardware and content, Panasonic has chosen to concentrate on the here and the now. And we can't fault the brand for that.

Panasonic’s 2018 TVs introduced the HCX processor, features to dynamically optimise HDR performance, and an integrated Dynamic Blade soundbar-like speaker – and while the company’s priorities haven’t changed much, its ingenuity has.

Before Phillips joined the party in February, Panasonic was the only TV brand to announce support for both Dolby Vision and HDR10+, rival dynamic metadata formats. While Samsung, Sony and LG only support one or the other, all of Panasonic’s OLEDs and most of its LCDs for 2019 support both, which could be useful once HDR10+ content gains momentum and studios and distributors release 4K Blu-ray discs and video streams in both formats.

Elsewhere, much of the innovation is exclusive to its flagship GZ2000. Naturally the best-equipped superstar, it features a bespoke Professional Edition 4K OLED panel exclusively customised by Panasonic R&D engineers.

Aiming to better the integrated soundbar that came with 2018’s Panasonic FZ952 models, it also has Technics-tuned, upward-firing Dolby Atmos speakers to deliver more immersive sonics, especially when playing content with an Atmos soundtrack. The unit comprises two speakers aimed upwards to add extra height to the sound. This is joined by one woofer at the bottom of the back panel, plus a left, centre, right, three-speaker configuration beneath the screen.

All of the forthcoming OLEDs and LCDs come with the new My Home Screen 4.0 interface, which has been designed to offer customised layouts, easier access to streaming services via shortcut icons, and the pinning of frequently watched TV channels to the home screen. Google Assistant and Amazon Alexa support offers voice control of the TV through a connected speaker, too.

There may be eight new OLEDs, but there aren’t huge discrepancies between them.

While the GZ2000 has the customised 4K OLED panel and upward-firing speakers, the rest of the flagship’s impressive feature set is shared with the GZ1500, GZ1000 and GZ950 models that sit below it.

There’s Panasonic’s HCX Pro Intelligent Processor, as well as support for every HDR format: HDR10+, Dolby Vision, HDR10 and broadcast-friendly HLG. They also support HLG Photo, an HDR format for still images that uses the HLG profile. As it’s featured on some of Panasonic’s latest Lumix cameras, the idea is that photographs can be displayed in optimal quality on the TVs.

Despite the GZ2000’s superior speaker arrangement, all of the OLEDs support Dolby Atmos. There’s also compatibility for Amazon Alexa and Google Assistants, allowing owners to perform voice commands to control certain elements of their TVs.

As the GZ1500, GZ1000 and GZ950 all use the same panel and processor, the difference between them comes down to aesthetic and sound quality discrepancies.

The GZ1500 features a Blade Speaker – ie. front-firing speakers below the screen – while the GZ1000 and GZ950 have inferior downward-firing configurations. The GZ1000 has a brushed aluminium L-shaped stand, designed to match the design of the company's soundbars, whereas the GZ950 has a more basic rectangular base.

There are three ranges of LCD TVs – the GX920, GX800 and GX700 – offering various screen sizes between 40in and 75in. They will all be available from spring.

The flagship GX920 (or GX940 in the EU) LED model – only available in 75in – is, like the OLED screens, powered by the new HCX Pro Intelligent processor. The GX800 has Panasonic’s standard HCX Processor, while the GX700 use its inferior 4K Studio Colour Engine processor.