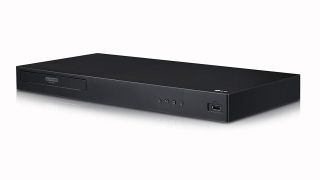 Thinking about buying a 4K Blu-ray player? Amazon Prime Day could be the time. You'll be able to save a whopping £125 on the LG UBK80 4K Blu-ray player, when the deal goes live (we're still waiting for it to appear).

Due to drop to a bargain £75, this LG UBK80 is the perfect addition to any 4K TV purchase. It supports HDR10, ensuring it'll get the best out of any compatible Ultra HD Blu-ray disc, and it’s fitted with 4K upscaling tech to make the most of your standard Blu-ray discs too.

Not one we've tested but a deal hard to ignore when it's a 4K Blu-ray player at half-price. There's HDR10 support (no Dolby Vision), 4K upscaling, HDMI, and a USB input round the front. View Deal

There’s no Dolby Vision, which you might find with more expensive players, but you get a USB socket for media playback on the front as well as HDMI and optical connectors on the back.

The LG UBK80 is not a player we’ve tested but if the excellent colour performance and fine detail control of the LG UP9070 is anything to go by, then this should make a decent purchase, and you just won’t find any other recognised 4K player at this price. The deal ends at midnight on Tuesday 16 July.