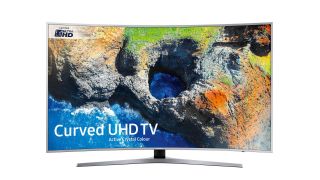 The bendy screen might not be as much on-trend it once was, but that doesn't make this any less of a fantastic deal. After all, it still features some top panel tech with its 4K HDR panel. And if the five-star Samsung UE40MU6400U (a close relation of this UE49MU6500) is anything to go by, then be prepared for some deep blacks and nuanced, natural colours.

So good is this offer, we've selected it as one of our best 4K TV deals on Amazon Prime Day!

Samsung UE49MU6500 49in 4K TV £379 at Amazon
HDR with Active Crystal Colour, 4K Ultra HD with upscaling, Samsung's Smart hub built-in and an immersive, curved screen display. For 48 hours only, you can save a solid ton on this silver-finish UHD TV. View Deal

The Samsung UE49MU6500 is a 4K HDR TV with Wi-Fi, Bluetooth, NFC and DLNA all enabled. It features Samsung’s Smart Hub app platform for direct access to all the streaming service and catch-up apps you'd expect, and it comes bundled with Samsung's swish One Remote control.

So what are you waiting for?