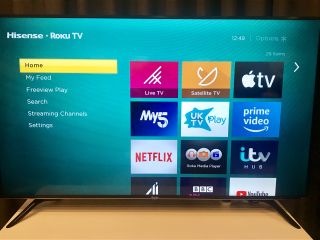 Recently announced at IFA 2019, the smart TVs are powered by the Roku operating system, offering a customisable home screen, thousands of streaming channels and advanced features like universal search and private listening. Need clarification on the latter? It's a neat little bit of tech meaning that through the Roku mobile iOS or Android app, you can redirect your TV's sound directly into your phone. Throw some headphones on and viola! Private listening deployed.

Chinese firm Hisense is celebrating its 50th anniversary this year. While it is the top TV retailer in China and South Africa, the company only arrived in the UK in 2012, and only launched its first official UK TV campaign in 2015. However, in terms of 50-inch TVs, 11 per cent sold in the UK are Hisense; more than Sony and Panasonic in that particular category – and the future looks bright.

Roku, the brains and braun behind Now TV, is a household name in the US where one in three TVs sold has the Roku smart platform baked in. Roku also boasts 32 million active account-holders worldwide.

What do you get with a Hisense Roku TV? Hisense says the Roku series boasts similar specifications to its current 7100 series, including 4K, UHD, HDR, DTS Studio Sound (so no Dolby Audio) and a backlit 'DLED' display. Where the two differ, of course, is that the 7100 has the VIDAA smart platform inbuilt, whereas Roku takes centre stage in the R7 series.

Roku's operating system is simple – a conscious decision by the company. For one thing, the physical remote has done away with the source/input button – arguably the most stressful button on any TV. Apps or channels appear as tiles, which can be moved up in the home screen for easier location. From the Roku Channel Store, you can pick and choose from 5000+ streaming channels including popular streaming services such as Netflix, Prime Video, Disney Plus and NOW TV. Hisense Roku TVs also include Freeview Play, bringing live TV and on demand content from BBC iPlayer, ITV Hub, All 4 and My5.

The TVs can also be voice-controlled via the Roku app. Although there's no Alexa or Google Assistant support, fire up the app, say "Tune to Channel Four" or "Launch Netflix" into your device and the TV dutifully obliges. The mobile app also lets you cast photos and videos to the Roku TV, and that private listening feature is a great option for when everyone else has gone to bed but you're simply not tired.

While we can't give our thorough appraisal just yet, from what we've seen at the pre-launch briefing, there's plenty to celebrate. Hold tight for an in-depth review...