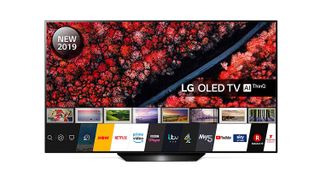 The LG OLED55B9 might be the South Korean giant's 'entry-level' OLED TV, but it boasts an impressive feature count. You get 4K, HDR, Dolby Vision and support for Amazon and Google voice assistants.

What's more, several major retailers including Amazon have slashed the price by around 35% to just £1099 / $1197 in the Black Friday sales, as you can see in the deals box below...

The 2019 55-inch B9 boasts a spread of connections, including four HDMI 2.1 inputs, that support Enhanced Audio Return Channel (eARC) and a trio of USB connections.

LG's fantastic webOS user interface makes an appearance, and comes with expanded voice assistance, including both Amazon Alexa and Google Assistant. Prefer something more traditional? You also get LG’s intuitive Magic Remote, which includes quick access to streaming services such as Netflix and Amazon Prime.

Naturally, being the entry-level model in LG's 2019 premium OLED range, it doesn't boast all the features and enhancements of the more expensive C9 or E9 ranges. Both of these use an Alpha 9 Gen 2 chip which delivers slightly more advanced picture processing.

Still, if you want to enter the world of high-tech OLED TVs without breaking the bank, this could be a great place to start, especially if our experience of the rest of LG's 2019 OLED TV range is anything to go by.