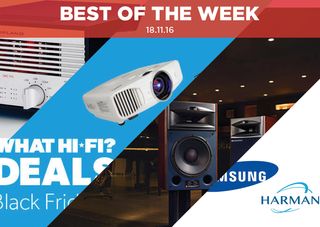 This week, Samsung bought US audio company Harman International, JBL introduced two new professional speakers and an item of the late David Bowie's personal hi-fi was sold for over £250k.

We have a variety of reviews, including Copland's rather tidy DAC 215, Philips's commendable 49PUS6401 4K TV and Amazon's latest tablet, the Fire HD 8.

MORE: What Hi-Fi? Black Friday deals of the week

Earlier this month rumours circulated that Samsung was about to buy Focal. Instead, Samsung has announced a takeover of US audio company Harman International.

Harman owns the likes of Harman Kardon, AKG and JBL, and has a strong presence in the automotive audio market; an area Samsung expects "to grow to $100bn by 2025".

JBL is has updated its M2 Master and 4425 professional studio monitors, with the JBL 4367 and 4429 respectively. You'll need plenty of dosh to afford them, though.

The late David Bowie's personal record player has sold at auction for over a quarter of a million pounds.

The custom-made Italian Brionvega turntable was made in 1966, and formed part of an auction of pieces from Bowie's personal art collection, which totalled over £30m in value.

Are these the dumbest smart headphones you'll see this year?

Can these headphones stop you from going deaf?

Gremlins vinyl cover transforms when wet and exposed to light

Amazon Music Unlimited lands in the UK to rival Spotify

The best Black Friday PS4 and Xbox One deals

10 Christmas gift ideas for music and movies on the move

What strikes you about Copland's DAC 215 is how clean and pristine it looks. Once it gets going, you can't forget how good it sounds either.

It boasts an "open, clean and precise presentation". It's easy to use too and, given a good source, offers a pleasurable listening experience.

Unlike some other budget 4K TVs we've seen, this Philips has HDR, which helps produce a bright and punchy colour palette. It also has ambilight, which is always fun.

However, it falls short elsewhere. Black depth could be better, there aren't many catch-up services and there's no HDR support for Netflix.

So while it's very good in places, it's not enough to get five stars.

Amazon's Fire HD 8 is a great budget tablet, but you'll need a Prime subscription to get the most out of it.

It has a wealth of content and features, and while it has some compromises (a less than sharp screen, poor cameras), it's the least compromised in the budget tablet arena.