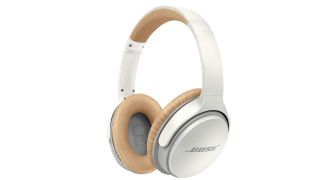 Amazon has taken a second chop to the Bose SoundLink II price with the wireless headphones now on sale for just £110 on Amazon Prime Day.

Both the good-looking white pair and the black models are available with the £90 saving. All about portability and convenience, they’re for music on the move with up to 15 hours of playback on a a single charge and a 9m wireless range.

There’s an advanced microphone system for what Bose describes as HD voice calls no matter how windy or noisy the environment. They also switch between your listening and calls automatically.

Bose has a history of nailing the balance between good sound, style and features from its BoseLink devices, so we would expect these on-ears to live up to the promised ‘deep and immersive’ audio.

The BoseLink headphones II deal is for Prime Day only and will end on Tuesday 16th at midnight or when stocks run out.