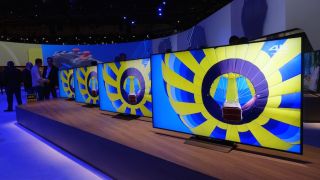 As always, CES delivered plenty of new products, from 8K TVs and 800-watt amplifiers, to Atmos soundbars and hi-res turntables.

Starting with smaller start-ups at CES Unveiled, progressing to the madness of CES Press Day and new products from LG, Panasonic, Samsung and Sony, and ending with our Stars of CES round-up of the 10 best audio products of the show, it was a jam-packed week of the latest technology. And that's before we mention all the interviews, talks and product showcases from the What Hi-Fi? International News Stage (watch them all in our CES 2016 YouTube playlist).

Other CES 2016 highlights included more news on MQA hi-res audio streaming, the grand unveiling of Technics' new turntable, 4K Blu-ray players from Panasonic and Samsung, plus eye-catching new kit from Bang & Olufsen, Naim, McIntosh, Monitor Audio and more. We even found a "hi-fi chair" where we could sit back and take it all in.

The Dan D'Agostino Progression monobloc is an absolute beast

Sony 2016 TVs: everything you need to know

The news so far ahead of the official start of the show...

No CES is complete without entire families of new televisions, mounted floor to ceiling with brightness turned up to 11. This time we are more excited than ever: next-gen tech has matured enough to be taken very seriously.

Over the past couple of years, we have witnessed the monopoly of LED panels get slowly eroded by LG’s push for OLED. It will be showing off more OLEDs, including its slimmest ever model – a body that’s thin all the way down, as opposed to skinny top and fat bottom.

The competition? Panasonic has recently joined the OLED fray with a spectacular 65in set, and we may see something a little smaller. Sony has shown little interest in the technology, but we wouldn’t be surprised to see something from Samsung this year.

Ultra High Definition (UHD) – four times the pixels of 1080p Full HD – is finally here in a meaningful way, with agreed standards and a healthy amount of available content.

There are already some great UHD TVs, but we will shortly see them really start to take over. Every major TV manufacturer will be prioritising UHD, and they will be more advanced than anything we’ve seen in 2015.

Expect smarter operating systems as well as improvements in display and processing technology. Full HD, meanwhile, will be gradually relegated to cheaper models and lower ranges.

Then there’s the matter of High Dynamic Range, which gets you much greater contrast levels. Development has been slow, as nobody can agree on a universal standard, but everybody agrees it will play a key part in the future of theatrical and home video consumption.

One of the more established versions is Dolby Vision, so we expect to see more hardware support for it. There will be a Dolby Vision demo featuring Dolby Atmos sound. It’s the first time the company has done that at a show.

As for the really wacky stuff, the bar is high. In 2014, LG showed off a prototype flexible OLED TV, which transforms from curved to flat at the push of a button. That progressed to a production- ready model in 2015. We expect to see wallpaper TVs, so flat and flexible they can be rolled up. Someone is bound to have an 8K display, too.

A fan of the bigger picture? You may be pleased to hear of development on the short-throw projector front. Philips has been working on a new design for its Screeneo projector. You’ll be able to get a 100in Full HD image with the projector just 44cm from the wall.

It’s not just about the displays, either. We will also get a good look at the Ultra HD Blu-ray disc format. Panasonic and Samsung have both shown off prototype UHD Blu-ray players (Sony has been biding its time, but it’s about time it made a move too).

There’s also plenty going on in the world of sound. We’ll start small: there is word that Audioquest, masters of tiny USB DACs, is working on a new range of ‘digital critters’. Given the immense success of the Audioquest Dragonfly, that’s got to be a good thing.

Bang & Olufsen has a tendency to pull out some crazy designs, and CES 2015 saw the Beosound Moment, a streaming system with a unique tablet controller featuring touch-sensitive wood buttons. It brought tactility back to music, and won one of our Stars of CES Awards. This time? The company is being hush-hush about its plans, but we just know something unusual is afoot.

Wi-fi audio is another trend to watch. It has sonic and functional advantages over Bluetooth, which has limited bandwidth, and more people are starting to find this out thanks to Google Chromecast Audio.

Next? Wi-fi audio headphones, we reckon. Imagine getting music streamed directly from the router to your head, with no intermediary like laptops or smartphones.

Multi-room audio is a category that has exploded in the last few years, and it is getting only bigger. Now, the more traditional audio brands are joining in.

Look at Yamaha’s MusicCast system – you’re no longer restricted to little speakers per room because now you can use your AV receiver too, among other components. We expect to see other established names take on the Sonos.

Finally we look at streaming services. It’s a tough game and competition is heating up. Rdio has fallen and Qobuz is after a new buyer. Now more than ever, streaming services will need to differentiate themselves. Spotify has its catalogue and ubiquity. Tidal stands out in sound quality. Apple, meanwhile, bangs the drum for personalisation.

A potential game-changer is MQA. This is a streaming technology launched last year, promising the sound quality of hi-res audio without the massive file sizes.

Whoever can incorporate MQA into their service is onto something huge. And it looks Tidal and MQA could have the hi-res answer. All eyes are on CES for a full reveal.

Then there's the arrival of MQA-ready products such as the Pioneer XDP-100R. MQA, for its part, has told us to expect major announcements.

Whatever shape the new products at CES 2016 take, we will be there to bring you all the news, pictures and videos from Las Vegas. And it will all get started on Monday 4th January.

We'll be on the ground in force bringing you the most important news and hands-on reviews on the new AV products on show.

And as an official CES media partner we'll once again be hosting the CES International News Stage alongside our sister publication, Stuff. Expect news, interviews, roundtable discussions and more with some of the most important people in the industry. You can see last year's video highlights on our CES 2015 YouTube playlist.