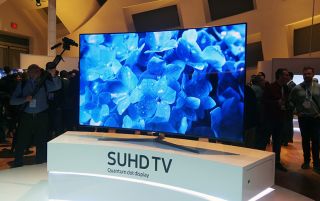 Samsung has announced details of its 2016 SUHD TV line up, including the flagship KS9500, described as the world’s first bezel-less curved TV.

While we’re not sure that ‘bezel-less’ is entirely accurate, it’s certainly one of the slimmest bezels we’ve seen on a TV, giving you more screen for less space.

This year Samsung has embraced the Quantum dot label for the first time, doing away with last year’s nano-crystal description and promising the most true-to-life picture quality ever offered by the company.

The entire range, comprising sets between 49in-88in, will support HDR content, with 1000-nit brightness to ensure a higher level of contrast between light and dark images.

As well as the barely there bezel, Samsung has produced a “360-degree design” which means not even the back panel is overlooked, with a smooth finish and not a screw in sight.

All the 2016 SUHD TVs will once again be built on Samsung’s proprietary Tizen operating system, with a newly designed Smart Hub that allows quicker access to your favourite content from live TV, on-demand and gaming platforms.

Another new addition is Smart Control, which offers the ability to automatically recognise devices connected to your TV and allows you to control them all with the Samsung Smart Remote included with all SUHD TVs.

Samsung is also pushing console-less gaming, offering more than 500 streamable and downloadable games to play directly on your TV, including titles like Assassin’s Creed III and Batman: Arkham Origins from PlayStation Now.

Finally, this year all Samsung's 2016 SUHD TVs will feature Internet of Things hub technology that will allow you to connect with and control more than 200 SmartThings compatible devices, including door bells, light bulbs and baby monitors.

We’ll keep you updated with more details on Samsung’s wider SUHD TV range as soon as we get them.

MORE: Samsung's 4K Blu-ray player goes on pre-order in the US