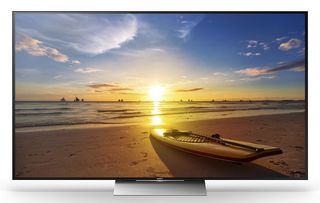 The company's flagship range for 2016 is XD94, and consists of one model, the KD-75XD9405 (pictured above). It's a 75in set which includes Sony's top full arrray, backlight-dimming technology.

Next comes the XD93 series, which offers a choice of 65in and 55in, 4K Ultra HD models. XD93 also sees the introduction of Sony's brand new Slim Backlight Drive, a grid-array backlight system which Sony claims can "manage the light source more accurately in each specific zone, while still maintaining a slim profile".

Curved models feature again for Sony, courtesy of the SD85 series (65in and 55in, pictured above), while the entry-level XD85 range completes the new line-up.

As was the case in 2015, all 2016 4K models use the Android TV operating system, while they're also all compatible with HDR content - Sony has even gone so far as to design its own '4K HDR' logo to flag this up, although there was no mention of whether they meet the new Ultra HD Premium spec, recently announced by the UHD Alliance.

Triluminos colour processing claims to deliver a wider, and more accurate colour range than previous iterations of the tech, while the sets are all powered by Sony's 4K Processor X1 chipset.

The new models will start to be introduced from March with pricing to be confirmed over the coming months.