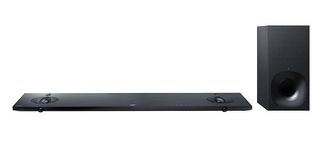 Sony has announced three new 2.1ch soundbar models at CES 2016, as well as an all-in-one soundbase and a 5.1ch soundbar system.

The HT-NT5 is the flagship of the range, and echoes Sony's new 'Slice of Living' design language in its 2016 Bravia TVs, with a low-profile aluminium design that won't obstruct your view.

Inside, there are two three-way speakers driven by six discrete amplifiers, plus a newly-designed Sigma subwoofer unit with dual magnets for a total power output of 400W.

It offers an HDMI 2.0 output for connecting to your TV, and supports the latest 4K sound and picture standards. It is also capable of playing back hi-res audio up to 24-bit/96KHz and will be available for £600.

The former offers 330W of peak power, working with Sony's S-Force Pro front surround technology and a newly-designed sound deflector to create what Sony describes as a "satisfyingly wide soundstage".

The slim HT-CT390 also uses this same sound deflector to widen its sound, but offers just slightly less power at 300W, while HT-XT2 comes with an integrated subwoofer for 170w of sound and will support TVs up to 55in.

Finally, there is the HT-RT3 5.1ch soundbar system (£300), which comprises a soundbar, sub and two wired rear speakers, forming a total 600W of power.

Prefer to go wireless? The rest of the range allows you to hook up a pair of compatible Sony wireless speakers as wire-free rear channels (available separately).

Of course, the whole range will offer built-in wi-fi and Bluetooth and support wireless multi-room audio, via the Sony Songpal app. There will also be NFC for fuss-free pairing and Spotify Connect and Google Cast support for streaming. The range is due to launch in April.