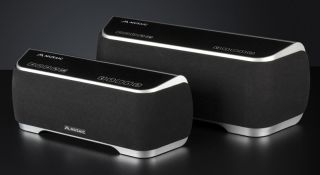 Multi-room systems proved to be popular at the event last year, and CES 2015 was just the same; we saw countless new stereo amplifiers and a promising number of new turntables, some complete with nifty, new features. High-resolution audio was once again a big talkin point, too.

One of the first stereo amps we saw at CES 2015 came from Parasound. Its new Halo amp was announced at CES Unveiled on the first day of the show. The Halo is the American manufacturer's first integrated amp and features the latest ESS Sabre32 Reference DAC. It has coaxial and optical digital inputs and will be able to accept 24-bit/192kHz audio.

The Halo amp was announced alongside a new Zdac V2.

Creek Audio was another hi-fi specialist keen to show off its new integrated amp: the Evolution 100A (above) features Class G circuitry and delivers 120W into 8 ohms and 170W into 4 ohms.

Plug-in upgrades are available and these include an FM/AM tuner and a multi-input DAC with Bluetooth receiver and USB input.

We were also treated to the Dan D'Agostino MLife amplifier. This $48,000 Stars of CES winner features an LCD display, built-in Bluetooth, AirPlay and DLNA and can support 24-bit/192kHz audio.

It's clear that many manufacturers believe multi-room and networked audio to be the future of hi-fi. With an extensive range of streaming services to choose from, and it being ever easier to store an entire library of music on one device, it's hardly surprising.

Bang and Olufsen unveiled the BeoSound Moment music system (above). A Stars of CES winner, this device features a detachable, double-sided control system. On one side you're presented with a "mood wheel" of colours. The idea is that it connects to your networked music library, as well as Deezer, and you pick a colour to represent your current mood. The system will then curate a playlist with music to reflect that mood.

The other, wooden side, features a touch-sensitive control to play/pause music and adjust the volume. PatternPlay technology promises to learn your listening habits based on time of the day and day of the week.

British hi-fi startup Musaic launched its new high-resolution multi-room system (pictured above). The high-resolution support isn't the only headline-grabbing feature about it though, for it can also integrate with smart home-lighting and home automations hubs. The system will comprise the MP10 Music Player and MP5 Music Player, with an MPL Music Player to follow soon after.

German manufacturer Raumfeld also announced additions to its multi-room range. The One Bar can be used as a soundbar to boost your TV's sound or can accept streams over wi-fi from the likes of Spotify and Tidal.

Not content with just releasing some stereo amplifiers, Cambridge Audio unveiled two new network music players as well. The CXN network music player can stream music from UPnP devices, supports Apple AirPlay, and can accept Bluetooth streams via an optional dongle. USB inputs allow you to play music from a range of external devices and high-resolution 24-bit/192kHz files are accepted too.

Meanwhile, the 851N network music player (above) has the ability to upsample all sources to 24-bit/384kHz and can support AirPlay and UPnP streaming among many other features. A 4.3in colour screen shows you what's being played and Spotify Connect, iPlayer Radio and internet radio are all built-in. The Cambridge Audio 851N picked up a Stars of CES award.

We already knew about the ATC SCM40A loudspeakers before heading out to Las Vegas, but being able to see and hear them up close confirmed they were worthy of a Stars of CES Award. The new floorstanders build upon the success of the SCM40s by adding ATC's tri-amplifier pack.

JBL announced the budget range of Arena loudspeakers (above), which comprises two standmount and two floorstanding models, a centre and a subwoofer.

Epos treated us to the K3 passive loudspeakers, the largest floorstanding model in the K-Series range. Epos also introduced an Active-K solution, which allows owners of existing K-Series speakers to upgrade to an active option.

Meanwhile, GamuT picked up a Stars of CES Award for its RS7 floorstanding speakers. Details were thin on the ground, but GamuT was adamant the new speakers would deliver an accurate, dynamic and full-range performance.

And let's not forget wireless speakers. Two in particular caught our eye this year, the first of which is the Kube (above). The result of a collaboration between Polk Audio and Thomas & Darden, the Kube is a Bluetooth wireless speaker, and cool box - it will kick out 100dB of sound, while cooling its 30-litre internal capacity.

Monster also unveiled a wireless speaker with an interesting feature: the new SuperStar Backfloat is a fully waterproof speaker that will cost £150 upon release.

Some big news for portable audio fans came from Sony as the successor to its high-resolution Walkman was announced. The NWZ-ZX2 (above) features a raft of improvements including SD card support, DSD support and a new "superior" LDAC Bluetooth codec. While it may seem a little expensive at £950, Sony says "every stage of the audio pathway is upgraded".

Support for studio master quality 24-bit/192kHz files is aided by the inclusion of Sony's S-Master HX digital amplifier and DSEE HX audio processing, the latter of which will upscale CD and lossy MP3 files.

There were a pleasing number of new turntables on show at CES too. Ion Audio unveiled the Air LP, which can stream audio over Bluetooth and act as a DAC from vinyl to digital.

Onkyo introduced its new direct-drive CP-1050 turntable (above) which features a die-cast aluminium quartz-lock controlled platter in an effort to ensure "smooth, precise and stable rotation" when the turntable is being used.