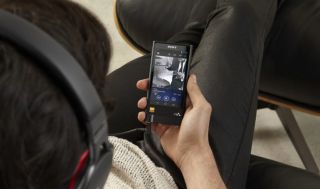 The NWZ-ZX2 Walkman follows in the footsteps of the ZX1, which was previously Sony's flagship portable music player for high-res audio on the move. It's due to go on sale in February 2015 for £950.

"Every stage of the audio pathway is upgraded", says Sony; the ZX2 Walkman pitched at "on-the-move music lovers who value the difference" (in sound quality, presumably).

And Sony has addressed a couple of our gripes with the ZX1 - firstly by adding an SD card on the ZX2 (the internal storage remains 128GB) and bringing support for DSD audio files.

There are now two digital clocks inside, aiming to ensure the audio signal is prepared for whatever file and format you choose to throw at it.

Also new is support for the LDAC Bluetooth codec, which claims to be "three times" more efficient than previous Bluetooth technology when it comes to delivering audio data.

In addition to wireless Bluetooth for streaming music, there's also NFC support for one-touch connection to compatible devices - such as wireless speakers.

Support for studio master quality 24-bit/192kHz files is aided by the inclusion of Sony's S-Master HX digital amplifier and DSEE HX audio processing, the latter of which will upscale CD and lossy MP3 files, though we're not sure about Sony's "near Hi-Res quality" claim.

The ZX2 is wireless compatible, too, allowing you to stream music from your DLNA server over your home network, for example, and there's also a USB connection for connecting to a headphone amp or DAC.

The 4in FWVGA screen (which is the same spec as the ZX1) is powered by Android 4.2 and the device is said to weigh around 235g. Meanwhile, Sony claims the ZX2 battery life is around 60 hours for compressed music, around half that for high-res audio. It will charge in 4.5 hours. Take a look at our brief hands-on video with the ZX2 on the CES show floor.