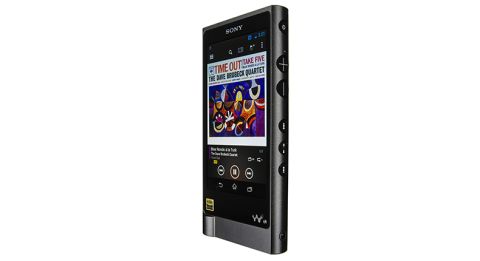 A £1000 portable music player (give or take fifty quid) may seem like madness to some. With many of today’s smartphones such as the LG G4, Samsung Galaxy S6 and even Sony’s own Xperia Z3 already capable of handling high-res music, it’s an extra box to carry about on your person.

However, none of them are in the same league as the NW-ZX2 and for an audiophile who wants a certain level of sound quality while out and about, it makes sense.

The black finish is a little sedate compare to its smaller sibling, the NWZ-ZX1, but get the ZX2 in your hand and you can feel the quality. It’s reassuringly weighty and sits snugly in your palm.

The textured leather patch on the rear aids grip, as do the curved sides and the bump on the lower part of the back panel.

There’s a row of controls lined up along the right edge of the player. The buttons are slightly recessed and vary in size depending on their function.

The volume buttons, for example, are slightly larger so it’s easier for you to change when this portable is hidden away in a pocket.

Along the bottom edge there’s a bulge which houses the headphone jack, Sony’s proprietary WM-Port for charging and a flip-out plastic cover which hides the player’s microSD card slot.

One of our criticisms of its sister player, the ZX1, was the lack of expandable memory. It’s good to see you can add to this Walkman’s 128GB of internal storage.

The Sony is powered by the Android 4.2 (aka Jelly Bean) operating system. It’s a shame that it isn’t the very latest 5.2 version, but as you spend most of your time in Sony’s music player app, you don’t really feel as though you’re missing out.

The display is a four-inch touchscreen and while it’s not as quick to respond as some of our favourite smartphones, it gets the job done with minimal fuss.

Battery life is up to 33 hours for hi-res files, but if you’re only playing low-res files you should get closer to 60. Of course, if you’re using an app like Tidal and streaming over wi-fi, then the battery takes a much bigger hit.

As it’s an Android device, you get full access to all the apps and games in the Google Play store. This is great news if you’re also a subscriber to music streaming services such as Spotify or Tidal because you can download the relevant apps and access their vast music catalogues.

Getting your music collection onto the Sony is done via a couple of different methods. There’s the simple drag and drop, where the Sony is treated like a USB hard drive.

We kick things off with a DSD (Direct Stream Digital) version of Marvin Gaye’s What’s Going On and are suitably impressed. The Sony produces a wonderfully clear sound and is a master at picking out detail and nuance in the music.

It highlights all the various elements of the track be they the bongos, backing vocal or the fluttering bassline in the background.

The Sony allows you to enjoy them all individually, but still manages to present them in a coherent, organised fashion.

Next up is Lorde’s Glory and Gore in 24-bit/48kHz FLAC form. The NW-ZX2 has some serious grunt and communicates the mean, moody nature of the track with ease.

There’s a sense of weight to the track’s powerful bass notes, but the Sony displays a level of control and confidence to music that players further down the price scale simply can’t muster.

Switching over to Spotify, we stream Gallant’s Weight in Gold, which sounds beautifully rendered and rich with information. It’s easy to follow every chord from the bluesy guitar punctuating the background, while each of the slow, lazy bass kicks sound meaty and full-bodied, giving the track a solid foundation.

The lead vocal oozes with emotion and richness ­– there’s no harshness or brightness here. Compare the same track streamed to an iPhone 6 or Samsung Galaxy S6 and, well, there is no comparison. The sound through these phones is less substantial, lacking detail and dynamics.

Our only complaint is that the Sony sounds a bit too controlling. It’s so obsessed with delivering a solid, commanding performance that it loses some of the fun factor.

Pharrell William’s Happy is an upbeat, uptempo fun-filled track and while the Sony has no problem excavating layers of detail and delivering the track with gusto, it just doesn’t sound quite as playful as it could.

To boost audio playback, Sony’s added a couple of sound-enhancing technologies to the ZX2. DSEE HX claims to upscale normal music to ‘near high-resolution’ sound quality.

If you’re planning to play music from Spotify or you own some standard resolution or highly compressed digital music files, then it’s worth experimenting

On the other hand, ClearAudio+ adds a little too much vim and vigour to the sound – the presentation becomes overpowering and lacks subtlety. This feature also didn’t like being used with Spotify or Tidal, shrinking the presentation and sucking the life out of any music being played.

When it comes to a suitable choice of headphones for the Sony, a decent pair will make the most of its ability. This means steering clear of budget in-ear and on-ear models.

Something like the Sennheiser Momentum 2.0s at £270 would be a more worthwhile investment.

You won’t be surprised to learn that video playback on the Sony can’t compare with the stunning displays seen on the top smartphones – after all it loses out in terms of screen real estate and resolution.

Play the video for Rihanna’s Bitch Better Have My Money and the image looks punchy and colourful on the 854x480 pixel screen.

Motion and contrast are handled reasonably well, but the picture lacks the glossy, clear and detailed video playback delivered by the top smartphone screens. It’s fine for a few minutes, but we wouldn’t sit through a whole blockbuster.

The NW-ZX2 is an impressive piece of kit, so if you’re an audio enthusiast who takes music seriously and want to take it on your travels, then we’d definitely recommend you take a closer look.

Read all our Sony news and reviews here