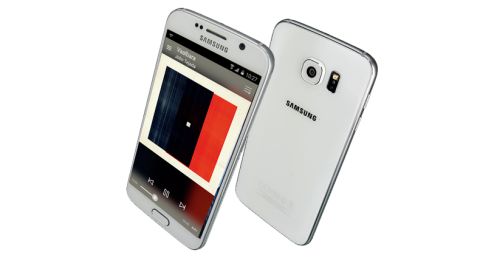 Finally, a Samsung smartphone to be thoroughly proud of

We’ve been fairly critical of Samsung’s smartphones in the past. Regardless of impressive specs, their persistently plastic construction left us cold, especially when the likes of Apple, Sony and HTC offered gleaming slabs of glass and metal. With the Samsung Galaxy S6 series, this is no longer an issue.

This year, Samsung has two flagship models, the Galaxy S6 and the Galaxy S6 Edge. They’re essentially the same phone, with the S6 Edge sporting a more sculpted body and a screen with curving edges.

We fell in love with the S6 Edge, so we have high hopes for the ‘regular’ S6. But really, there is nothing regular about the S6. This is an extraordinary device. That much is apparent the moment you pick it up.

Samsung has at last created something you can use in public without a slight sense of embarrassment. The plastic is gone, so now it’s all metal edges and glass on the front and back. It’s a looker and a delight to handle.

Though the design has taken its inspiration from Apple’s iPhone 6, the S6 is arguably even prettier and shinier.

Power up and things get even better. The screen is a 5.1in AMOLED display with a QHD (2560x1440) resolution, and it is gorgeous. Want a great picture on the go? Look no further.

It’s super-sharp. There are just under 580 pixels per inch, and while it is impossible to count them with the naked eye, the overall effect annihilates Steve Jobs’ assertion that 300ppi is the limit of human perception.

Of course, it’s not enough to have a lot of pixels – those pixels need to work hard too. And they do. We are momentarily dazed at the level of contrast on offer, which is an inherent strength of AMOLED panels. Whites are scintillating, while at the other end, the darks are black as night.

Between the two extremes there is a good deal of subtlety – early AMOLED screens tended to lose out on subtle detail, but that’s not the case here.

Colours are vivid and attractive, on the whole. As is traditional with Samsung, there are different picture modes with which to finesse the palette. Basic mode is the most neutral to our eyes (if not always the most exciting) while AMOLED modes offer different shades of brightness.

We settle for Adaptive Display, which offers a good balance of vibrancy and verisimilitude.

The Samsung’s nearest competitor in this area is the LG G4. The LG has size on its side (5.5in), and also demonstrates greater nuance in shading, but the Samsung counters with greater contrast and dynamism.

When it comes to audio quality, the competition is less close. The Samsung is a clear step ahead. It’s an engaging listen thanks to tight timing, a reservoir of power and the readiness to use both.

The S6 happily handles high-resolution audio too. We load up a few tracks, up to 24-bit/192kHz, and are greeted with detail and dynamism. Samsung smartphones have not always been the most insightful or refined, but the sound on the S6 is a job well done.

The iPhone 6 still edges ahead in rhythm and snap, but the Samsung has more than enough going for it to be a welcome alternative.

The more we use the phone, the more we get the sense that Samsung has learned a few lessons. Not only is the build and performance outstanding – the S6 is also lovely to use.

Operation is accelerated yet stable, showing no signs of the lag that plagued previous generations. And it helps that Samsung has really toned down its previously tacky interface, which sits on top of Android’s 5.0 Lollipop operating system.

That 64-bit octa-core Exynos processor and 3GB RAM is a powerful combination. Our commands were never met with hesitation, even when things got complex, and the Samsung had no problems juggling a Full HD video with a few high-res tracks and an intensive 3D game.

Even the camera is fast, loading up in just 0.7 seconds when you double-tap the home button. The pictures are very impressive. You get a 16-megapixel snapper with an aperture of f/1.9 (good for low-light shots).

Results are among the best we’ve seen this year, even on the basic Auto mode. There is plenty of detail and colours are convincing. The sharpness may lose out to the LG G4, but there’s very little in it.

There is no shutter speed option, but now we’re just nit-picking.

Our only misgiving about the Samsung Galaxy S6 is that it’s now a sealed device, meaning you can’t remove the back to swap batteries or add memory cards as you could with previous Galaxy phones.

Is it a deal breaker? We wouldn’t say so. The standard 32GB will be eaten up quickly if you’re big on full-resolution photos and high-resolution tracks, but Samsung also offers 64GB and 128GB models.

The battery is not the last word in longevity, lasting 10 hours of video with half brightness and wi-fi connected – but it does charge at a ridiculously fast speed. Ten minutes plugged in gets you four hours of juice.

Bravo, Samsung! Although the restrictions on memory and battery may drive heavy users straight into the hands of LG, that doesn’t stop the Galaxy S6 from being a great achievement.

Its sophistication and extraordinary multimedia capabilities make it a seriously tempting proposition for anyone wanting top-quality picture and sound on the go. This is easily one of the best smartphones of 2015.

Read all our reviews of Samsung products