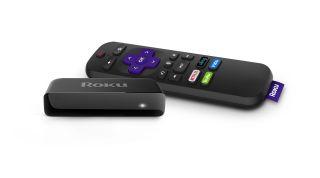 Want to enjoy the highest-quality video streams from the likes of Disney+, Netflix, Amazon and Apple TV? The Walmart Black Friday deals have got you covered, with an awesome deal on the Roku Premiere+ 4K HDR streaming stick – down from $49.99 to $39.99.

The Roku Premiere+ delivers a feast of 4K and HDR content at a price it's hard to beat. The 'plus' version gets you stronger wi-fi and handy voice controls, which support Roku's remote control app for iOS/Android.

Plug it in and you'll get instant access to a claimed 500,000+ streaming movies and TV episodes from the likes of Amazon, Netflix, Hulu, VUDU, Apple TV 4K, Disney+, ESPN and HGTV, as well as music and radio from Pandora and iHeartRadio. So, basically, all the major players in the streaming universe.

Splashing out 40 bucks might actually save you money, too, should you decide to ditch expensive cable and switch to on-demand streaming services with no annual contracts.

On a super-tight budget? The 'Featured Free' section provides plenty of free movies, TV episodes, and live news such as ABC and CW. Plus, you can also dive into YouTube.

If we had to nitpick, we'd point out that unlike the Amazon Fire TV Stick 4K, it doesn't support Dolby Vision. But from where we're sitting (which is the couch, obviously), this 4K HDR streamer looks to be outstanding deal.