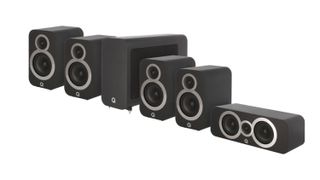 Q Acoustics is getting in on the Black Friday act with a range of discounts across its excellent speakers, speaker packages, soundbars and soundbases.

The Q Acoustics M2 soundbase was already fantastic value for money thanks to its ease of use and crisp, punchy sound, and now it's down to £149 from its original price of £299.

There's also a healthy discount on the Q Acoustics M3 soundbar, which is down to £129 at Richer Sounds, from an original price of £299. We awarded the soundbar four stars thanks to a weighty sound - now it's better than half price.

Want something a little larger? Then how about the 3050i floorstanding speakers. Yet another five-star products, we described the Q Acoustics speakers as "full of energy and even better than their predecessors". They're now down to £549 from £649.

In the market for some Black Friday home cinema deals? Then you will be glad to hear that Q Acoustics has also reduced the prices on its 3010i 5.1 speaker package and the 3050i speaker package.