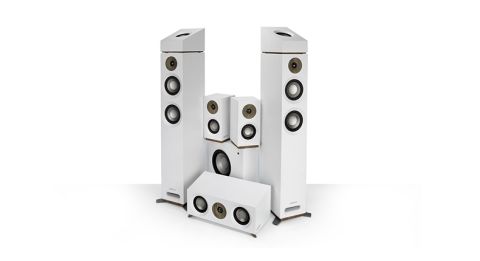 For a 7.1 Atmos package on a budget, this Jamo is decent value

Pocketing change from £1120 for a full 7.1 Atmos speaker package seems almost too good to be true. When you consider the cost includes a sizeable pair of floorstanders, you can almost write it off as quality sacrificed for quantity, right?

However, throw in the name Jamo and we’re all ears. The S 807 HCS is still a lot of speaker for the money but, having heard recently what the company can create on a budget (specifically its infectiously fun S 805 floorstanders at £349), our hope is for another outright bargain.

The S 807s form the front left and right channels here, and they're effectively an upgrade on those S 805s. Though at first glance they add just a second 12.5cm woofer below the same 25mm soft dome tweeter, the S 807s also offer a neat solution to Atmos integration.

Look around the rear and you’ll notice they can be biwired.

Slot the feet of a pair of S 8 ATM speakers into the holes on the top of the cabinet, however, and that top pair of inputs connect directly to the height channels on your AV receiver, sending the signal through the S 807s and leaving the Atmos speakers clean of any terminals of their own.

Though the traditional practice of wiring up each speaker individually to many might not appear that messy, it’s all in line with Jamo’s intention to mix style with substance and practicality in this Studio 8 range – and that objective is again evident in this package’s centre speaker.

As it's tapered toward its front end, the S 81 CEN doesn’t sit squarely on a traditional speaker stand (as we would usually set a center channel up).

Instead, two small wooden legs grow from beneath each 10cm woofer (one either side of the tweeter) which make it simple to position on a rack or cabinet already below your TV or projector screen. And they offer some isolation too, of course.

So the only speaker stands necessary are those to elevate your surround pair of standmounters. As their name suggests, the S 801s are similar in form to their centre-speaker sibling - they each sport one of the same 10cm woofers, and echo the look of the S 807s. But on rather a smaller scale.

All that’s missing, then, is the subwoofer – and the S 808 is an easier sub to miss than most. With a 20cm driver powered by 100 watts of Class D amplification, it’s a wonder how Jamo has fitted so much rumble into a cabinet so slim.

At only 176mm deep, it sticks out no further into the room than the front channels. The company even suggests storing it under the sofa – you don’t get much tidier than that.

And if we were rediscovering our soft spot for Jamo following the stereo performance of its S 805 speakers, we’ve grown only fonder having spent a good while in the company of this S 807 HCS package.

That same energy is present, bounding through an adrenaline-fuelled flick such as Mad Max: Fury Road, but with the detail and dynamic understanding to taper its enthusiasm when rendering the pitch-dark soundtrack to Blade Runner.

Those floorstanders are undeniably the stars. There is minor coarseness across the board, so you’ll need to give a little thought to system matching, but the S 807s impress with their full body and confident dynamics.

This prowess does affect integration a little: the centre and surround speakers, being smaller in scale, can’t quite match the assertiveness of their floorstanding family members, so you'll sometimes notice when voices (in particular) move from one speaker to the next.

A lot of the bass is handled by the S 807s, those front-firing reflex ports earning their keep - but the heft of the S 808 sub helps the system delve even deeper.

It isn’t, perhaps, the tautest low end - in fact it's marginally soft - but it’s not a dealbreaker.

It’s fair to say Jamo has built a speaker package very much in the image of what we heard from the S 805 floorstanders.

It’s a family sound, the kind you’d hope for (but don't always get) from any range of speakers.

The S 807 HCS isn’t just a great speaker package due to its cost, though, nor simply because of its size and practicality. it is a really decent home cinema system.

There are improvements that could be made, edges we'd like smoothed - but we’d be more than happy to go to the movies with Jamo any time.

See all our Jamo reviews