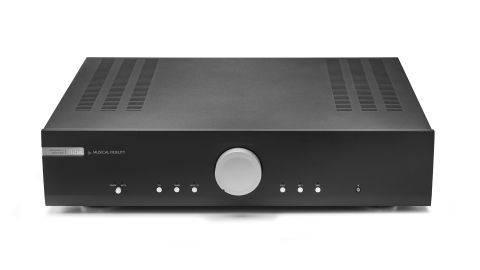 It would be easy to dismiss Musical Fidelity’s M2si on the grounds of features, or rather, the lack of them. This is one of the most stripped-back amplifiers we’ve come across at this level. It offers the basics – a remote control, six line level inputs, including a tape loop and a home cinema bypass option to help integration into a surround system – and not much else.

You’ll be searching in vain for a phono stage, let alone a headphone output or digital inputs. Even purist rivals, such as Rega Elex-R (£949) or its little brother the Brio (£599), do better by including good phono modules. While a cheaper alternative such as Audiolab’s 6000A (£599) gives you it all as far as features are concerned.

Of course there’s more to picking an amplifier than just the feature count. If the Musical Fidelity’s modest range of facilities is acceptable, as it will be for many people, you’ll find it an excellent product.

The M2si is well built, feeling more luxurious than any of the rivals mentioned above. Neat touches such as using solid metal for the controls rather than plastic really lifts the impression. The overall finish is impressive and we like the simple and clean-cut appearance.

Under the lid, you’ll find a preamp section that works in Class A mode for lower distortion. It also enjoys a separate power feed to improve performance and reduce any unwanted interaction with the power amplifier.

There’s no shortage of muscle here with the M2si delivering 76W per channel into 8 ohms and giving a healthy increase to 137W per channel as impedance halves. That impressive set of figures strongly suggests that this amplifier should be able to produce high sound levels with any price appropriate speaker.

We give the M2si a couple of days of use before listening seriously, and its sound stabilises relatively quickly. We use our usual Naim NDS/555PS reference music streamer and ATC SCM 50 speakers to find the true envelope of the M2si’s abilities as well as more price appropriate products, such as Dali’s Oberon 5 speakers and Cyrus’s CDi CD player. It doesn’t take long to realise that this Musical Fidelity is a terrific performer.

It delivers a large-scale sound, one that’s packed with authority and substance. Listening to Orff’s Carmina Burana we’re aware of the M2si’s refinement and ability to deal with musical complexity without sounding stressed. It can track individual instrumental strands with ease yet never lose sight of the whole. That’s a rare talent at this level.

This amplifier images well too. Every note is tightly focused within an expansive and spacious soundstage. The presentation remains stable even when things get busy, and at high levels.

Dynamic expression is a strong point. The M2si manages the sweep from quiet to loud superbly and is as happy rendering low-level subtleties as it is sledgehammer crescendos.

The tonal balance isn’t as neutral as the Audiolab, but it is even handed and where it diverges, it does so in a wholly sympathetic way – the top end is sweet while the mid and bass have just a touch of added richness. This flavouring is slight but it is enough to make the amplifier less fussy about partnering equipment and recording quality than most rivals.

We play Bruce Springsteen’s American Skin (41 Shots) and the Musical Fidelity sounds right at home. It has punch and power but tempers all that muscle with a light touch that captures the passion and texture of Springsteen’s coarse vocal delivery brilliantly. Bass is handled with flair – every note hitting hard and true. The song’s steady rhythm is communicated well, though here the likes of the Rega does even better.

We play a wide range of music from grand orchestral scores from John Williams to Tracy Chapman’s understated debut set and The XX’s electronica and the Musical Fidelity never disappoints.

It’s a superb all-rounder and one of the best amplifiers we’ve heard below the grand mark. At £799 it splits the difference between two exceptional Rega amplifiers and it's a worthy alternative to either of them – that’s high praise indeed. If you can live with the limited feature count, this one deserves to go on the shortlist.