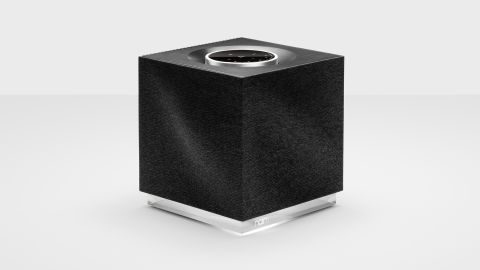 The Mu-so Qb retains an inherently likeable presentation, but has matured over the three years since its first generation.

The first draft of this review was excellent. Yet, like every article we publish, it still had to go to the sub-editors: their job being to tinker and tidy up, retaining the character of the writing, while making it clearer and more exciting to read.

And if these words still appear in this review, then we can be sure they’re confident that this is precisely what they’ve done.

So, we know full well the value of revisions. But still it was quite the surprise when first we heard those made by Naim with its second generation of the Mu-so Qb wireless speaker. The previous iteration was great, earning five stars when it was first reviewed, but this version is truly phenomenal.

Outwardly it is similar to the previous model – Naim has hardly altered the Qb’s shape, after all – so it has been a sprucing up rather than wholesale change. There is a trio of new colour options: if the stock black is too modest for your tastes, you can now choose an Olive, Terracotta or Peacock grille.

It still has that gorgeous rotary volume dial with touch-screen controls in the centre – though this illuminated version is also now in its second generation – and there are physical connections for USB, optical S/PDIF, aux-in and wired internet. The latter we’d recommend for a stable connection, though there is on-board wi-fi as well.

But it’s what happens inside that leads to this wireless speaker becoming so exceptional. Remove the grille and you’ll find a three-way stereo speaker combination with upgraded and optimised midrange and bass drive units, all powered by a total of 300W of amplification.

The single bass driver fires directly forwards, while its pair of tweeters and midrange drivers are angled outwards for wider dispersion and a more spacious soundstage overall.

Inside is Naim’s new streaming platform, which has been developed by the company’s engineers over three years. It is also found in the second-generation Mu-so and Uniti products, right up to the £20,000 flagship ND 555. Processing power is increased tenfold from the first Mu-so Qb for even greater speeds and musical accuracy.

You won’t be short of streaming options, either, thanks to the vast array of features included here. There is now Chromecast Built-in and Apple AirPlay 2 alongside Bluetooth for streaming from a device, as well as Spotify Connect, Roon Ready, internet radio and Tidal, the latter with a 90-day free trial.

You’ll also be able to access files up to 32-bit/384kHz anywhere on your home network via the updated Naim app. This is also your ticket to building a high-end multi-room system with room for five Naim streaming products to be controlled by one device. Want to add the new Mu-so Qb to an existing Apple or Google multi-room ecosystem? No problem, Naim has seen to that too.

The Mu-so Qb 2nd Gen comes with its own remote, so once set up, you can control it without necessarily being glued to your smartphone or tablet, but it’s worth at least using the app to choose your sound profile whenever you move the speaker: Naim has developed three pre-set EQs for whether the Mu-so Qb is near a wall, in the corner or out in the middle of the room.

We tested mostly with this new Naim offering in a bit of space, on an Atacama hi-fi rack, and even before it was properly run in we could tell this was a wireless speaker ready to challenge the current class leaders.

There’s certainly value in giving the Mu-so Qb a day or so to run in before offering full judgement. Its treble response is lively and open, but there is a little brightness that takes a few hours to properly polish and make sparkle.

But sparkle it does, matching the richness of tone immediately evident throughout the rest of the register. The overall presentation is muscular but lean. There’s plenty of bass weight and low-end punch precisely delivered, but this Mu-so Qb never skews its balance this way or that.

In fact, there are many ways in which this speaker belies its box-like dimensions. Whereas once everything felt a little enclosed, the Mu-so Qb 2nd Generation operates with a mantra of openness. There’s an airiness to the soundstage, those angled drivers doing well to disperse sound while maintaining focus of the music’s core.

It isn’t as if detail was particularly hiding in the first generation of the Qb from three years ago, but this is a more insightful listen. Instruments are organised tidily, and often with sparser pieces it is as if you could reach into the air and grab the notes as they’re emitted.

The second generation also improves markedly on its predecessor’s timing and dynamic range. It not only keeps up, but tends to thrive while delivering snappy rhythmic patterns, issuing a spritely performance anchored but not tied down by its impressive scale in the low frequencies.

It can bear its teeth when necessary, snarling as it attacks grimy and distorted guitar lines, but has also a gentler, more caring side when the noise quells to a whisper. This may not be a replacement for a separates hi-fi system, but it is well equipped to bring that kind of hi-fi sensibility and analysis to one-box wireless listening.

That said, if this is to be your one source of music in the house, we can think of few combinations of separates able to both better the sound and match or undercut the price. It has its innate limitations in terms of upgrades and stereo imaging, of course, but the Mu-so Qb 2nd Generation is not just another expensive wireless speaker.

Though its compact dimensions may suggest differently, you really are getting a lot for your money here. Most importantly, though, the greatest value is not found in its features or design, but in a sonic performance that will effortlessly dispense of any one-box rival within a few hundred pounds of its asking price.

Naim has proven that in hi-fi, as with publishing, a second draft can be wonderfully transformative.