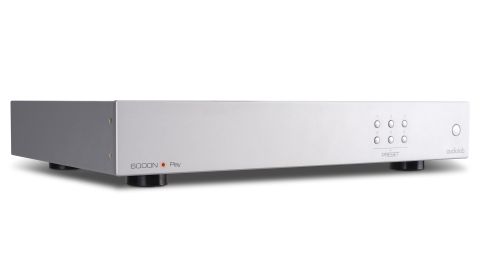 Had Einstein still been alive today, we could just picture him drawing up his next quantum physics theory while listening to the Audiolab 6000N Play

Audiolab’s first standalone music streamer would certainly have fitted Einstein’s philosophy that a ‘simple and unassuming manner of life is best for everyone’ – aesthetically, the 6000N Play is as unassuming as hi-fi streamers come, with a screen-less, largely unadorned chassis that gives nothing of its vast network talents away.

But behind that modest façade, the 6000N Play has every right to exude an air of quiet confidence. It arrives as the third component in its mid-range 6000 Series, following the five-star 6000A integrated amplifier and the 6000CDT CD transport, borrowing tech and features from both of its slightly older siblings.

The 6000N Play uses the same DAC chip (ES9018 Sabre32 Reference) found in the 6000A ampliﬁer (and the company’s Award-winning M-DAC), which we’ve previously praised for its ability to present a capable and composed sound.

It features ESS Technology’s Time Domain Jitter Eliminator, which works to analyse and algorithmically correct the input signal to improve timing. The 6000N Play’s circuit design borrows from the 6000CDT in its isolated power supply and toroidal transformer.

With the talents of the 6000 Series siblings stopping short of network streaming smarts, the 6000N Play is left to create its own heart and soul. However, the foundation of its streaming experience is based on another’s creation, DTS’s Play-Fi hi-res, multi-room platform.

Having Play-Fi at its software core means that when connected to a network through ethernet or its dual-band wi-fi, the 6000N Play can access services such as Spotify Connect, Tidal, HDtracks, Deezer, Qobuz, Amazon Music, Napster, TuneIn, iHeartRadio and SiriusXM.

It also means it can stream hi-res music files up to 24-bit/192kHz from networked servers, thanks to DLNA and UPnP compliance. It can also connect wirelessly with up to 32 other Play-Fi-equipped devices for a multi-room set-up.

The gateway to all these functions is the DTS Play-Fi control app. We have used this platform before with the Award-winning Arcam rPlay, and can confidently say its well-equipped streaming smarts are backed by an intuitive, stable experience.

Access your music services, adjust volume and control a multi-room environment via the home screen, and as you voyage deep into a streaming service catalogue, pressing the DTS logo returns you home, while, another press returns you back to your last point of in-app navigation.

You’ll also notice a Hi-Res logo, which engages the all-important Critical Listening Mode necessary to enable high-resolution music playback. As Play-Fi is a universal multi-room platform that can connect rooms full of Play-Fi products together, the software downsamples hi-res files to CD quality (16-bit/48kHz) by default to maintain stream and bandwidth performance.

For those with single DTS Play-Fi products, or just a few connected, who are naturally prioritising optimum sound quality over bandwidth juggling, Critical Listening Mode scraps that downsampling process, enabling the full transmission of every bit and sample frequency.

While using a third-party platform largely means conforming to a ubiquitous, one-size-fits-all experience, Audiolab and DTS have worked to create a custom 6000N Play feature by way of six on-unit presets.

You can assign a preset for whatever is currently playing by simply holding down one of the six preset buttons on the unit’s facade. It’s much quicker and easier than using the app to navigate, and means you can come home from a day’s work, turn on your hi-fi, and be listening to Radio 6 Music with a single press of a button.

So far, so good, however selecting a preset often throws out app synchronicity so you have to start all over again when you want to change songs or sources. It’s an example of when hardware (presets) and software (app control) functions should get along better, but is a hiccup rather than a disaster.

A recent software update has brought ‘Works with Alexa’ support, allowing audio playback to be controlled via voice commands to an Amazon Echo speaker or Alexa-enabled device.

But all those troubles, as Paul McCartney might say, seem so far away when you’re settled into a radio station, playlist or album. So we play Big Thief’s Cattails and the Audiolab reveals a wide-open canvas, colouring it with well-imaged detail lavished with a welcome amount of subtlety and space.

It has the insight to capture the band’s trademark quality – Adrianne Lenker’s distinct vocal is carried with stark clarity, acoustic finger-picking is tangible, and there’s the dynamic interest to convey the subtle eruptions in its folky flair as well as the song’s inevitable build as it creeps slowly towards a dense, frenetic climax.

As we play Orange with Lenker’s honest, exposed vocal as the centrepiece, the 6000N Play puts its articulacy and transparency to the greater good to lay down the vulnerabilities in her quivering delivery.

It’s not as if the 6000N Play is unpunctual or not musically on the money. As we bring our listening to an upbeat close, the New Pornographers’ Champions Of Red Wine is driven with pace and precision as the drumbeat thrums away and the melodic electronica cascades. Consider us agreeably entertained.

While music streaming has earned its hold on the music industry and subsequent ubiquity in manufacturer’s hi-fi catalogues, understandably not everybody is ready to consign their other source components to the bin. And the Audiolab 6000N Play, with its price, unassuming design and streaming features, doesn’t ask you to.

The Play is a great, affordable way to implement streaming into your system without compromising sonic quality – and with the added bonus of being able to slip into your hi-fi rack inconspicuously. Quite frankly, it’s the best budget solution we’ve had the pleasure of meeting.

Read our Audiolab 6000A review

Read our Bluesound Node 2i review