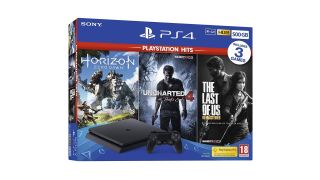 There were some good PlayStation deals over Black Friday, but none as good as this new Cyber Monday deal: get a 500GB PS4 and arguably the three very best games available for the console for just £200.

Sony PS4 500GB with The Last of Us, Uncharted 4 and Horizon Zero Dawn £200 at Amazon
Buying a console bundle often involves accepting one or two mediocre games in order to get the discount you're after. Not here - this is the standard PS4 console with three of the very best games ever made for it. They're PlayStation-exclusive games, too, so can't be played on any other console.View Deal

You don't need to take our word for it that these are great games: review aggregator Metacritic has them scored at 95 per cent, 93 per cent and 89 per cent respectively, making them some of the very highest-rated games of this console generation.

And while you won't get to play these games in pseudo-4K as you would on a PS4 Pro, this standard PS4 console does boast HDR, which is pretty transformative -assuming you've also got an HDR TV.

If you haven't got an HDR TV, it's not too late to pick up a great deal on one. Check out all of the best Cyber Monday TV deals.

Cyber Monday deals from around the web