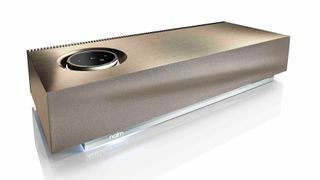 You can save a whopping £200 on the four-time Award-winning Naim Mu-so premium wireless speaker at John Lewis this Black Friday.

This Special Edition version, released last year as a John Lewis exclusive, sports a gold finish of its brushed aluminium veneer and shaped grille – an apt visual representation of the abundant sonic talents held within.

Featuring a pair of dome tweeters, two midrange drivers and two woofers, each powered by a 75W digital amplifier, the Mu-so was named our wireless speakers Product of the Year when it first arrived in 2014 and won three more Awards after that.

Naim Mu-so premium wireless speaker £695 at John Lewis
The Naim Mu-so is simply one of the best wireless audio products we've tested in the past five years. Its incredible detail levels, rhythmic drive and awesome dynamics was the most like hi-fi we'd heard from a wireless product for many years. For £695, it's an absolute bargain.View Deal

Though the Mu-so 2nd Generation was released this year – another five-star speaker, as if you didn't already know – its predecessor was forward thinking enough that it is still far from out of date in terms of features.

There’s aptX Bluetooth, AirPlay, UPnP, Spotify Connect and thousands of internet radio stations on board. Physical inputs include a USB port (which charges and plays Apple devices as well as USB-stored music), an optical input (limited to 24-bit/96kHz) and a 3.5mm analogue input.

There’s also an ethernet port to go alongside the built-in wi-fi, hidden under the unit with the power socket to keep wires out of sight. Whether you’ve got an iOS or Android device, laptop or NAS box, this Naim can play it all.

File compatibility is extensive as well. The Naim supports all popular audio formats, from low-res MP3s and Spotify streams to 24-bit/192kHz WAV, FLAC and AIFF files. You get full-fat high resolution through the wired ethernet connection, while going wireless limits it to 48kHz.

And what about that volume dial? If we could give a sixth star for its tactility we probably would. It is gorgeously weighted, to the point you'll likely spend as much time turning your music up and down as you will actually listening to it.

We've always been fans of the Naim Mu-so, and the fact you can get this Special Edition now for only £695 – that's cheaper than the Mu-so Qb 2nd Generation – makes it only more appealing. Buy with confidence.