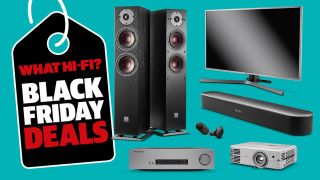 If you're looking for a bargain, you won't be disappointed. Highlights include the five-star Cambridge Audio Melomania 1 true wireless earbuds, which offer rich, detailed sound for less money than Apple's standard AirPods. They've been dropped from £150 to £99.95.

In the market for a compact-yet-powerful Bluetooth speaker? Cambridge has also slashed the price of its Air 100 wireless speaker from £200 to just £49.99. That's a huge saving of £150.

So what are you waiting for? Feast your eyes on the Black Friday deals below...

Cambridge Audio Melomania 1 true wireless headphones £99.95
These five-star wireless buds blew us away with their rich, detailed sound. What's more, they're now even cheaper than the Apple AirPods 2 and can be yours for just £100.View Deal

Cambridge Audio ALVA Duo phono preamp/headphone amp £199.95
If you own a turntable that could benefit from a new phono preamp, you can save almost £50 off the classy, well-specified ALVA Duo. The excellent, integrated headphone amp is just a bonus.

Cambridge Audio Topaz AM10 integrated amplifier £129
Save £70 on the entry-level AM10, a decent option for anyone looking to start a new system. Specs include an integrated phono preamp for Moving Magnet cartridges which could come in handy.View Deal

Cambridge Audio Topaz SR10 stereo receiver £199
If you're on a budget, and searching for some affordable amplification, then Cambridge Audio has a Black Friday budget option for you. And, you can pocket a cool £100 saving in the process.

Cambridge Audio Azur 851N network player £1099.99
This knockout Cambridge streamer is a brilliant option that justifies every penny of that price tag. Take note of this cracking deal and £300 price cut.View Deal

Cambridge Audio AXA25 integrated amp £199.95
With a focus on performance and affordability, the AXA25 boasts 25 watts per channel, four analogue inputs and a USB port. Step up to the more powerful AXA35 for a built-in phono stage for turntables.
View Deal

Cambridge Audio AXC25 CD player £199.95
The AX series promises great hi-fi performance on a budget. You get a set of analogue outputs, a remote control, and playback of CD-R, CD-RW and CD-ROM discs.
View Deal

Cambridge Audio Minx MIN12 home cinema speaker £39.95
Not much bigger than a Rubix cube, this discreet speaker is ideal for box rooms or as part of a home cinema set-up. As we put it, "Where space is tight, the miniscule Minx fits the bill and sounds fabulous."View Deal

Cambridge Audio TVB2v2 soundbar & subwoofer £199
The sleek and compact TVB2 soundbar/sub combo should suit many a living room and give your TV audio a much-needed boost. Buy now and save £50.View Deal