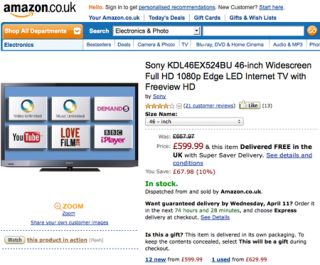 There's a chance to pick up a bargain on Amazon over the Easter weekend, with offers on TVs, electronics and Blu-rays.

'Deals of the Week" include a Digihome LCD/LED 16913HD 16in small-screen TV for £80, a somewhat larger Sony KDL-46EX524BU Full HD, LED edge-lit internet TV with Freeview HD for £600 and a Jawbone Jambox wireless hi-fi speaker for £110, available in red or blue.

If you're looking for something to watch on your Blu-ray player, the Alien Anthology Blu-ray is available for just £9.97.

And Amazon, like other retailers, is offering a free Sonos Bridge with the Sonos Play:3 and Sonos Play:5 wireless music systems, until May 1st.

Other deals include up to 40% off Klipsch headphones, a similar discount on iPod docks and up to 20% off DAB radios.

If you spot any more great deals, let us know in the comments box below.