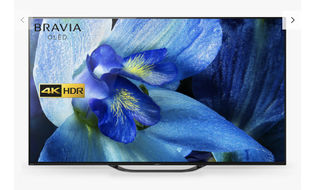 Waiting for Black Friday is a waste of your precious time – that is, if it's a Sony 4K OLED you're after. Why? Because several retailers, including John Lewis, Richer Sounds, and Sevenoaks, have dropped the price of the 55-inch Sony AG8 4K 2019 OLED TV (KD55AG8) by a huge £500 ahead of Black Friday. Its new price: £1299  – which is almost as affordable as OLED TVs come these days.

Click through to the retailers below, most of which are offering the deal, to see (and, of course, purchase at) the discounted price of £1299.

Sitting just below the Sony AG9 Master series OLED, the AG8 gets the X1 Extreme chip rather than the X1 Ultimate of the AG9, and that means it misses out on some of the most advanced picture processing features, but the core experience shouldn't be vastly different. We haven't tested this particular model, but we're very familiar with Sony's class of 2019 – the Sony ZG9 and Sony XG95 both gained five stars from this publication.

The Android platform promises a wealth of online content, which you can control with your voice thanks to the built-in Google Assistant.

You'll also get YouView, which brings together catch up TV from across BBC iPlayer, ITV Hub and All 4, plus you get over 70 live TV channels and radio stations for free, such as BBC 1 and 2, ITV, Channel 4, E4, Channel 5, 5 USA, ITV 2 and Dave.

Chromecast lets you 'cast' your videos, photos and apps to the TV straight from your smartphone or tablet (Android or iOS) via wi-fi.

The design is minimalist, but the display is the star here. The stand can be rotated 180 degrees to raise the screen, leaving ideal space for your sound bar beneath. A super-slim bezel with cables neatly hidden from view completes the aesthetic.

For just £1299 while stocks last, there's an awful lot to like for very reasonable money.

The best 4K TV deals ahead of Black Friday