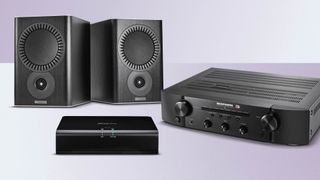 Never mind the vinyl revival, modern living dictates that few people have the luxury to dedicate a whole room to their music collection. Besides, the concept of physically owning music has long since departed. Who has the time or inclination to put up shelves to hold more CDs, or dig through crates of LPs to find the track you wanted to listen to hours ago?

Streaming is a modern solution, cutting down on the need for a huge amount of hi-fi kit, and bringing you millions of tracks at your fingertips. And best of all, hi-res streaming means the sound quality is improving all the time.

This system will get you started on your way to streaming success – you’ll never need to visit another stuffy old record shop ever again. Better still, you don’t even have to ditch your old hi-fi kit.

Arcam’s rPlay is the latest addition to the brand’s rSeries. It’s a compact streamer that turns even the most traditional, physical-format-centred, ‘dumb’ system into a plug-and-play-almost-anythingnetwork streaming ecosystem.

Thanks to its built-in DTS PlayFi streaming platform, the rPlay canunlock the ability to stream music wirelessly from smartphones, tablets or laptops to speakers throughout the home, and from a range of music sources.

With PlayFi’s music streaming inventory including the likes of Amazon Music, Tidal, Spotify, Napster and Deezer, as well as internet radio, Apple Airplay and compatibility with NAS drives on the same network, you’re pretty much covered.

Download the dedicated DTS PlayFi app and you’ll be able to simultaneously stream services on up to eight rPlay devices connected to the same network. Did someone say multi-room?

The rPlay supports PCM files up to 24-bit/192kHz, although if you’re taking advantage of the Arcam’s multi-room capabilities, hi-res files will be compressed to CD-quality. The DTS PlayFi app has a ‘Critical Listening’ mode to get round that, allowing native streaming up to 192kHz, however it isn’t compatible with the rPlay.

Connect an rPlay to an amplifier or external DAC, and the rPlay reveals a competitively solid, tonally even and articulate presentation. We don’t expect streamers of this calibre to be about tip-top timing, but the Arcam’s seemingly natural fusion of size and scale is credit to its cohesiveness. The detail on offer isn’t short of benchmark at this price.

The Arcam rPlay is a compact, easy to use and solid-performing opportunity to anyone who wants to reach past the physical format confines of their traditional system without spending a fortune.

All you need to do is add a suitable amp, and the Marantz PM6006 UK Edition should fit the bill. Marantz has fine-tuned its Award-winning PM6006 amplifier, for just about the finest performance you’ll get in return for this money.

Outwardly the UK Edition looks almost identical to the original, apart from some additional branding. The front face is dominated by a pair of dials – one for toggling input and one for volume. On the back panel, there are five analogue line-ins, a coaxial and two opticals, outputs for two pairs of speakers and a tape loop for recording. There’s no USB input as Marantz says it would be impossible to include one at this price point.

It’s a characteristically full-bodied and focused Marantz presentation with plenty of detail to boot. Musicality is one of the PM6006’s strengths – the balance is tonally even and overall it’s pleasingly insightful, with a nice wide soundstage. But even more so, its dynamic confidence and rhythmic handling of instruments highlight this as a budget-to-midrange gem.

There’s a certain smoothness between strands, yet also enough punch and drive to grab attention, with the Marantz’s keen sense of timing accented by a dynamic range sympathetic to leading notes and auxiliary rhythms.

The PM6006’s talents are such that it trumps many amps much further up the food chain. The built-in DAC is a decent performer that retains much of the detail we hear through the line stage, but loses a bit of body and natural warmth on the way.

This UK Edition is pretty much in line with what went before, only with a little more focus and detail and possibly a touch more high fidelity. Rest assured you’re getting as good an amp as this relatively meagre sum will allow.

To complete this system, all we need is a pair of budget speakers. The affordable speaker market is highly competitive, and at £400, the Mission QX-2s fall between hugely capable budget performers, such as the Monitor Audio Bronze 2s (£280), and class leading mid-market opposition from KEF’s brilliant Q350s (£500) and the similarly priced Dynaudio Emit 10s.

At 32cm high and almost as deep, the Mission QX-2s are a chunky proposition, needing stands with a decently large top plate to sit comfortably.

Mission has used the company’s unusual tweeter under mid/bass arrangement here. The advantage of this configuration is that it makes the distance between the acoustic centres of both drive units and the listener more even, so delivering a more coherent sound.

The drive units are a little unusual too. The 38mm tweeter is a ring radiator design with a shaped phase plug in the centre. The backpressure from the diaphragm vents into twin rear chambers, which helps to reduce resonance. That 15cm mid/bass uses a smooth pulp/acrylic fibre cone that doesn’t have a dust cap. This kind of design tends to have a cleaner response and looks pretty tidy too. There’s an extra support behind the cone that lends greater rigidity to the area the voice coil attaches to.

These Missions QX-2s are terrific speakers, with an infectiously energetic character that makes them a pleasure to listen to. There’s lots of punch to that thumping bassline along with an impressive amount of grip. Bass notes are delivered with a surprising amount of weight for a speaker of this size. If you’re in the market for standmounters for a budget streaming system, you should consider these.