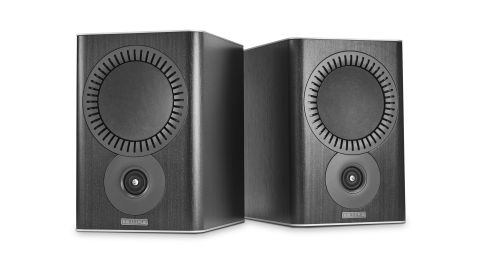 The affordable speaker market is a tough place to compete. With its £400 price tag, the Mission QX-2s fall somewhere between hugely capable budget performers, such as the Monitor Audio Bronze 2s (£280), and class leading mid-market opposition from KEF’s brilliant Q350s (£500) and the similarly priced Dynaudio Emit M10.

That’s award-winning competition that the new Missions have to respect, but not fear.

The first thing we notice when taking the QX-2s out of their packaging is their unusual proportions. At 32cm high and almost as deep, they’re a chunky proposition, needing stands with a decently large top plate to sit comfortably.

Mission has made an effort to make the QXs look distinctive, and we think it has succeeded. The company’s traditional (and still unusual) tweeter under mid/bass arrangement is used here. The advantage of this configuration is that it makes the distance between the acoustic centres of both drive units and the listener more even, so delivering a more coherent sound.

We also like the use of aluminium plates on the top and base panels – not only does it look good, but it also helps to solidify and dampen resonances in the rest of the cabinet. The QX-2s are available in four finish options – blackwood, rosewood, walnut and white.

The drive units are a little unusual too. The 38mm tweeter is a ring radiator design with a shaped phase plug in the centre. The backpressure from the diaphragm vents into twin rear chambers, which helps to reduce resonance and helps to maintain a wide operating bandwidth.

That 15cm mid/bass uses a smooth pulp/acrylic fibre cone that doesn’t have a dust cap. This kind of design tends to have a cleaner response and looks pretty tidy too. There’s an extra support behind the cone that lends greater rigidity to the area the voice coil attaches to.

A rear-firing slot reflex port is used to augment the mid/bass’s low frequency output. The port is ribbed in a bid to reduce the noise and distortion caused when dealing with low bass notes played at high volume levels. Its location at the back of the cabinet means that the QX-2s work best if given a little space to breathe, rather than being shoved right up against a back wall.

We place the speakers about 80cm out into our listening room, but we would suggest starting at 40cm and adjust from there. It’s always a trade-off between bass weight/quality and stereo imaging.

As with any standmounters, the quality of the support makes a big difference to performance. We use the Custom Design FS104 Signatures to good effect. As for partnering electronics, speakers at this price can’t afford to be overly fussy. They’re likely to be used with a wide range of electronics from affordable all-in-one systems right up to quality premium separates and will be expected to perform well regardless.

However, the natural amplification partners for these Missions are likely to be something from Marantz’s PM6006UK (£330) up to the Rega Brio (£600), with sources to match.

We like these Missions. These boxes are fun, with a lovely energetic character that takes a grip of the listener and refuses to let go. We start with Macklemore and Ryan Lewis’s Can’t Hold Us and the Missions revel in the song’s unstoppable momentum.

They charge along with this piece, delivering plenty of agility and insight. There’s lots of punch to that thumping bassline along with an impressive amount of grip. Bass notes are delivered with vigour and a surprising amount of weight for a speaker of this size. We like the way the QXs time too. They deliver the song’s hard-charging rhythm with plenty of verve.

They’re happy playing at both high and low volume levels. That might sound odd, but plenty of speakers lose too much of their liveliness at low volumes or harden up if pushed hard. These Missions avoid both shortcomings to an unusual degree.

We change gear to Tchaikovsky’s Marché Slave Op.31 and the Missions are happy to respond. While the likes of the excellent KEF Q350s sound more tonally even and manage render a more expansive sound stage, these standmounters still do well by general standards. They counter with expressive dynamics and the ability to tie the mass of instrumentation together into a more cohesive and musical whole.

There’s a decent degree of refinement here despite the QX-2s having a treble output that verges on the edge of excess without quite overstepping the mark. We like their high frequency bite and the skilful way the company’s engineers have seamlessly integrated the drive units. Avoid bright or aggressive partnering equipment, though.

Overall, the QX-2s are terrific speakers. They sound at home across a wide range of music and have an infectiously energetic character that makes them a pleasure to listen to. If you’re in the market for standmounters at this level you simply have to consider these.