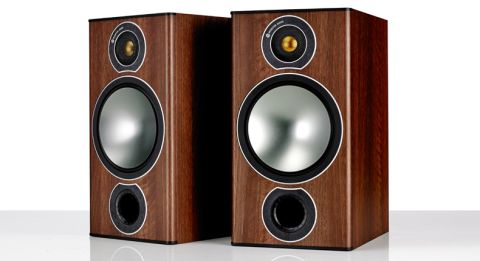 This latest generation of Bronze 2 is arguably the best yet. This is a truly complete speaker for the money

If these new Bronze 2s give you a strong sense of déjà vu, that’s exactly what Monitor Audio intended. Seeing no reason to mess with a successful formula, instead it has chosen the door marked ‘evolution’ and introduced a whole raft of engineering changes, making these arguably the most complete Bronze standmounters yet.

Introduced back in 2000, the original Bronze series was the entry point into Monitor Audio’s range. Five generations on, it remains at the core of the company’s product output, with the ‘2’ standmounter in particular a cornerstone of the brand – as proven by a slew of What Hi-Fi? Awards.

While the model’s appearance has hardly changed from the last generation, pretty much everything else has. The big news is that both drive units are new.

They still use Monitor Audio’s trademark C-CAM (ceramic-coated aluminium magnesium) diaphragms, but beyond that much has been revised.

The 16.5cm mid/bass now has a dished cone, without the traditional dustcap-covered hole in the centre, which not only helps rigidity but also gives a greater radiating area and better control at the top end of the driver’s frequency range. The surround has been redesigned to make the most of this change.

The traditional gold dome tweeter looks unchanged, but a lot of work has gone on behind the diaphragm. There’s a new venting system that leaks air into a rear chamber.

Monitor Audio has long been known for turning out classy boxes with neat edges and smart cosmetics and, with the Bronze 2s, the company has excelled again. There’s a quality of finish that few rivals can match.

Available in four neat, vinyl wrap finishes: Black Oak, Walnut, Rosemah and White Ash, the Bronze 2s have a relatively large enclosure, standing 35cm high, and made of 18mm MDF all round.

This structure is then braced for extra rigidity and further reinforced by a clever clamping arrangement for the mid/bass unit – the driver is held in the enclosure by a single bolt that enters through the rear panel.

This, along with the hidden magnetic grille fixings, helps give the Bronze 2s' front baffle a clutter-free appearance.

These speakers are rated at 90dB/W/m sensitivity and have an 8ohm impedance. This makes for decent volume levels with any amplifier capable of around 30W per channel power output. Integrateds such as Marantz’s Award-winning PM6006 UK Edition, or even NAD’s D 3020 V2, will make good partners.

These Bronzes are front ported, which should make them less sensitive to placement. We found them a little lumpy when placed right up against a wall and achieved the best sonic balance around 30cm out into the room.

It’s worth playing around with the toe-in angle to firm up the stereo imaging, but even so these speakers aren’t especially demanding – something that points to well-designed drive units and a carefully calibrated crossover.

It’s worth budgeting for some decent speakers stands, such as Atacama’s Moseco 6 (£120). Biwiring is also beneficial, improving openness and delivering a little more in the way of finesse.

Once up and running these Monitor Audios are hugely talented performers, but it takes a little while to appreciate just how good they are.

Their delivery isn’t showy, but give the Bronzes a little time and you’ll realise there’s real depth of talent here.

We start with Debussy’s Clair de lune and these Monitor Audios sail through the test. They have delicacy when required and handle dynamics deftly.

There’s plenty of insight here, from the way the trailing edges of the piano notes fade gracefully into silence to the Bronze 2s’ ability to track subtle pace changes. It’s a spellbinding performance, out of keeping from what we normally hear at this level.

A move to Hans Zimmer’s Inception OST allows these standmounters to show off their assured bass. Low frequencies are articulate and delivered with plenty of control. This confident low-end performance gives tracks such as Mombasa a firm foundation and real authority.

We’re impressed by the Bronze 2s' ability to stay composed, even at high volumes, and by the scale of their presentation. For the most part there are no rough edges here. This is a carefully-honed pair of speakers that brim with refinement.

This doesn’t mean that they won’t react adversely to aggressive recordings or forward-sounding partnering equipment. There’s enough transparency here to show exactly what’s going on further up the system chain, so it pays not to cut corners with the rest of your set-up.

We give Of Monsters and Men’s King And Lionheart a listen and are swept along by the energy of the music. There’s plenty of attack here and a fine sense of drive. Rhythmically, these speakers have a good amount of precision and communicate the momentum of the piece well.

The Bronze 2s’ open and explicit midrange makes the most of vocals, delivering them in an expressive way, while there’s plenty in the way of attack to keep us interested.

For their size, these speakers dig deep in the bass; they’re tonally balanced and impressively detailed too. Add fine build and Monitor Audio’s usual high standard of finish and there’s much to applaud here.

Previous generations of Bronze 2s were class leaders. As it turns out, this one is too.

MORE: The best budget hi-fi speakers you can buy

Read all our Monitor Audio news and reviews